Steamworld Heist brings us back to the awesome Steamwold universe, set a few hundred years after Steamworld Dig 2.

The Earth is shattered now and Steambots have been forced into space, working and scraping for water – the essential need for steambots to survive and as fuel for their ships. We take control of Captain Faraday Piper – a space pirate know as a “Cowbot” who starts in a tricky spot – most of her crew have been scrapped by Space Scrapers and she needs to rebuild a crew, get some water and move on. Along the way though the team get drawn into a bigger tale against the Royalists and become unwitting heroes. Its a classic tale and the post-apocalyptic steampunk setting is perfect for it. The dialogue throughout the game is well written and funny drawing me in, as I got further in I cared about my crew as a captain should!

Outside of a couple of short cutscenes that layout the story there is no voice acting in the game, our characters communicate with written dialogue. Instead our main audio experience comes from an epic soundtrack brought to us by Steam Powered Giraffe, a steam punk band that wrote some new tracks and tweaked existing ones to fit the universe of the game.

There are 12 tracks that feature live recorded instruments and singing that works perfectly for this game and really adds to the atmosphere and environment more than we usually receive in this type of game – in fact the band themselves feature in the game as themselves and pop up as you travel to space bars across the setting. In battle we get a nice set of sound effects from bullets ricocheting off of barrels to the sound of a shotgun spraying.

The art style of the Steamworld series from Image & Form is both cartoony and detailed, each bot is drawn very well and movement is handled well. The main draw of the visuals is the personality of its world and characters from those in your crew to your enemies (especially bosses).

With over 100 weapons and lots of different skills we get to see them all in action – some of which look epic and things like scopes and rockets look great. The way your ship boards another is done really well as you can see the silhouettes come together whilst controlling your character. Enemy ships are drawn well however they are all quite similar leading to a lack of variety. 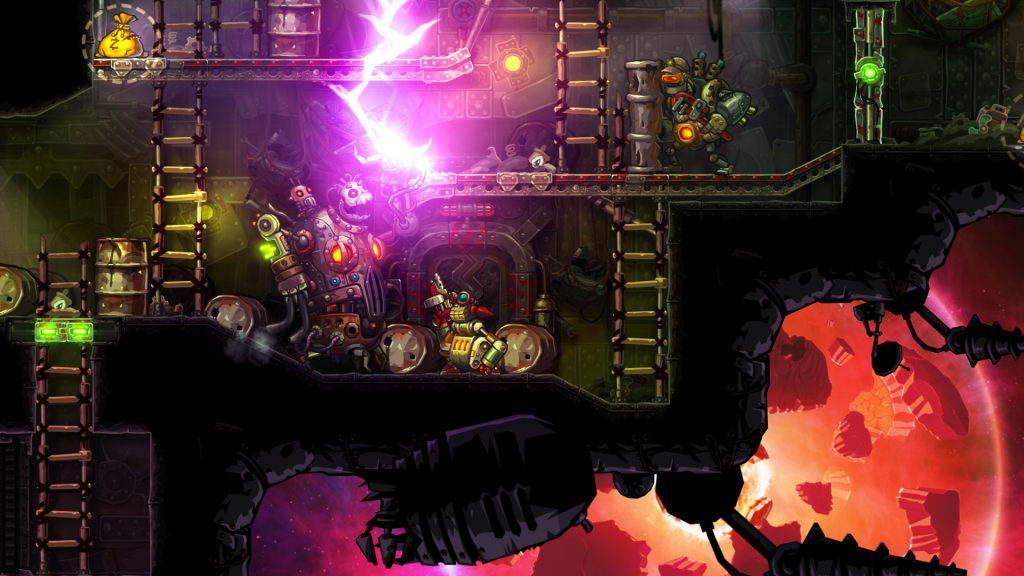 There are some epic effects in during battles!

In Steamworld Heist you Command space pirates in tactical, turn based battles. Each battle takes place on a ship and you control a number of Steambots, your goals vary slightly but broadly your aim is to kill enemies and gain loot just like any self respecting space pirates!

What makes the battles great is that rather than most turn based games where you line up your squad, hit attack and hope – in Steamworld Heist you do the actual shooting by aiming your weapon at your enemies which makes them much more engaging than they otherwise would be.

The controls are simple enough – the Left Analog stick is used to  select where to move your character, A is your general action button with B being back. Once you are in position hitting the R button selects your action whether thats your main weapon, a side weapon or special skill you have and then the Right Analog stick is used to aim – once lined up you hit A to shoot and you get to do this with each of your bots on your turn then its over to your enemy for their go.

You are able to walk and perform an action in the same turn or run which takes up the whole turn but lets you travel a lot further, each ship has a bunch of obstacles and different layouts that present challenges and opportunities when firing. For example you cannot shoot through the main hull but once in a room there are platforms that you can shoot through, you can take cover behind barrels and walls which can be shot apart and so can your enemies – there are explosive barrels as well which can be blown up to great effect and different types of enemy will act differently.

When porting this game over Image & Form managed to introduce full touch controls that work really well. You can play the whole game in this way, on the move the game works very well and though the touchscreen is responsive so are the controls so I found myself using those. 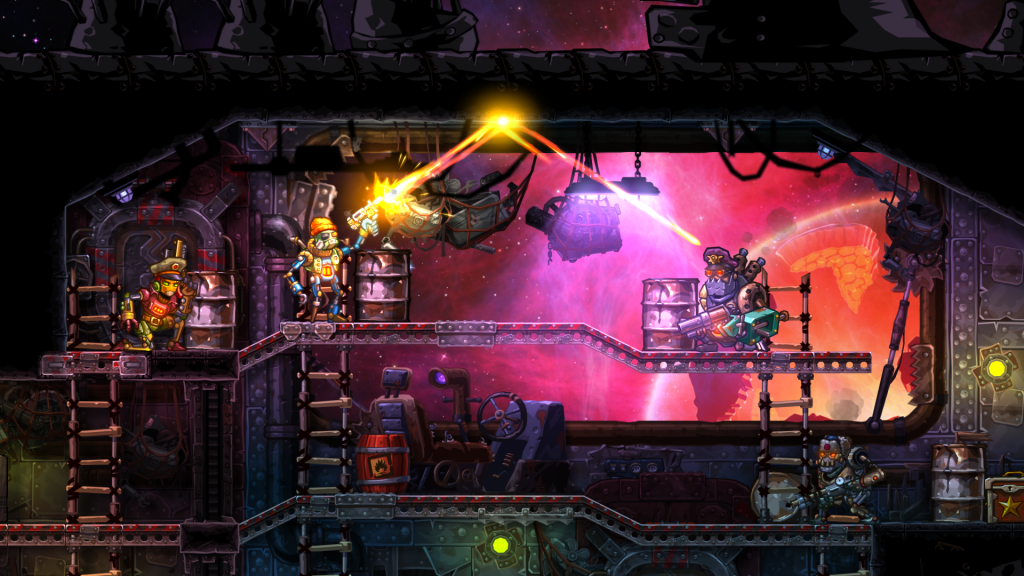 Your bots come in a number of classes which can each use a handgun and one other of the different categories of weapon – for example Piper can use Sharpshooters – Sniper style weapons which have a huge range but don’t allow you to move and shoot in the same turn, effective use of a sharpshooter can lead to dominating a map but it requires you to move to the right location whilst Ivanski can use Heavy weapons which tend to blow stuff up and not worry about things like cover, getting to close will kill your own bots though so figuring out the right balance is crucial to success.

One of the most interesting mechanics is the fact that bullets can bounce off of walls, some weapons don’t but a lot of them do and something like a sharpshooter lets you use a scope to see where your bullet will end up and plan outrageous trajectories for your shot that feel great when pulled off – to make things a little bit harder your bots breathe moving the line of fire so timing things just right is important.

In between missions you get to fly around in your ship and can stock up on weapons, accessories and news which often leads to missions as well as recruiting bots to to join your crew. Most of this takes place in space bars and other ships along the way. As you progress you will find a squad that you tend to lean on and as each bot levels they unlock additional skills – Sally for example gets a free shot if she kills an enemy with her first and later on can chain multiple kill shots to devastating effect with her mad dog skill.

Seabrass on the other hand is particularly good in close quarters and heals a point of damage each turn with his mend ability. Whilst you can drop Piper her skills are very strong, in particular her ability to make all allies stronger when they occupy a space next to her and the ability to provide a group heal are probably two of the best so it comes down to preference and style of play as to which other 2-3 bots to go with her depending on the mission.

Ships are randomly generated so redoing the same mission will end up with a different layout which offers you a great way to level up bots and gain more coin which can be used to buy goods – at first this will be more powerful weapons and accessories but soon you will get much better stuff from battle and will use the excess coin to purchase additional slots in your pack as you will soon run out of space with a bunch of bots to load out at any time. 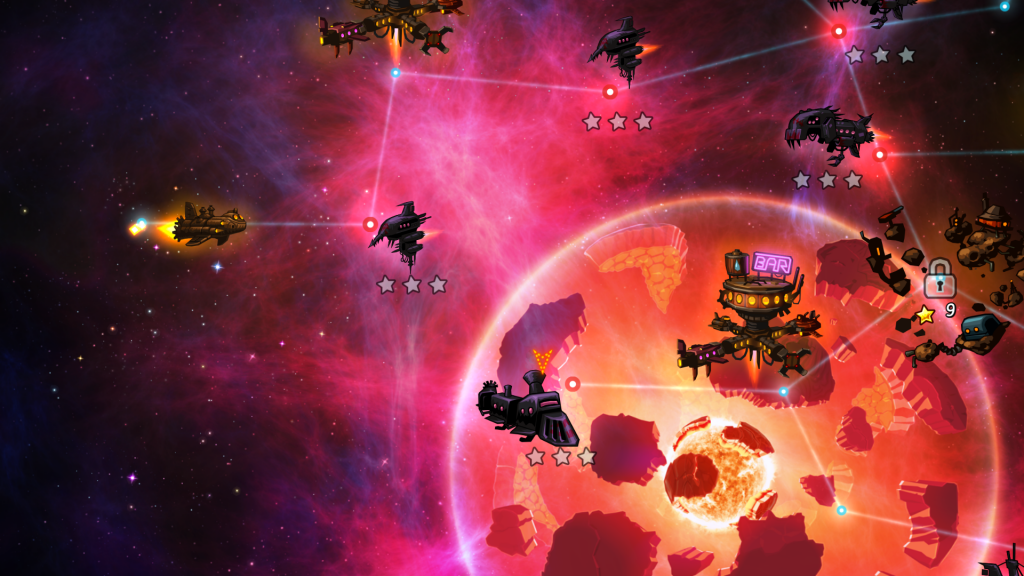 You get to fly around in between battles

I found myself having a blast heading between stages searching for rare weapons and accessories whilst progressing the story, the balance of the game is spot on and the little details like being able to shoot a hat of your enemy and then pick it up and put it on or lining up epic shots and seeing it in slow mo as it lands its mark are just fun.

The Switch version is The Ultimate version which as well as touch controls brings with it all DLC and New Game+ modes to draw out your enjoyment past the 10 or so campaign hours. For a game thats best in class for its genre the price of $19.99 in the US and £14.99 is fair, I experienced no slowdown, bugs or other issues and its just a solid game.

Best Bargains on the eShop – Steamdigging!

Best Bargains on the eShop – Who’s My Hero?

Best Bargains on the eShop – Ooh, my my!