You are the mythical warrior known as the Harbinger, appearing when Urralia is in crisis. War tears the land asunder with two warring factions going head to head, and as the day ends, you witness the destruction of the world by the dark god.

Using the power bestowed upon you – the Omensight – the Harbinger can relive that fateful day. With the help of the unknowing characters of the day’s events, the Harbinger needs to uncover the reason for the apocalypse and weave a new narrative to stop it. There are multiple endings.

Going into Omensight, I did not know what to expect. I didn’t really know much about the game, only that I liked the art style and the combat looked good. I was, at first, a little unnerved to find that Omensight is in fact a murder-mystery style game. I have played a few games from the genre before and found them boring with loads of dialogue and not much else happening. I have never been so happy to be so wrong about a game before.

Omensight is a murder-mystery game that looks beautiful, diverse, and the writing is excellent. As the Harbinger, it is your task to revisit the same day to solve who killed the Godless Priestess, who can stop the world from ending. To do this, the Harbinger will need to interact and play out the day from different characters’ perspectives. While doing so, the Harbinger will learn more about each of the seven characters themselves as well as the day’s events, thus leading the story’s narrative from one of destruction and death to one of saviour and life.

More Than Just A Murder-Mystery Game

Spearhead Studios class Omensight as an ‘Action Murder-Mystery’. Well, it did not disappoint in the action and combat departments. For me, the combat is up there with some of the best fighting mechanics on the Switch, if not, the best I have seen on the platform. Omensight’s controls are simple but polished: you light attack with X, heavy attack with Y, dodge with A, and jump with B. During the story, the Harbinger unlocks magical abilities that are mapped to the shoulder buttons. One ability is to freeze time in an AOE (Area Of Effect) covering an unforgiving 360-degree circle. The Harbinger locks on to the enemy by facing the one you intend to attack, then you can let out a flurry of up to 3 light and heavy attacks. Depending on the combination, the finisher will be different. During an attack, you can push the left stick toward another enemy, and just like that, the Harbinger bounds effortlessly to that enemy.

The dodge is the most useful part of combat. Dodging works by pressing A when an exclamation mark appears above any of the enemies’ heads, then the Harbinger will acrobatically jump out of the way. You can use Dodge up to three times in quick succession. As soon as it has performed the dodge, you can go right back to attacking. To keep the action flowing, the dodge will cancel almost any attack – this allows for some awesome looking fights. Besides the grace of movement and flow of combat, it will treat you to a beautiful, sometimes mesmerising, light show. Each time the Harbinger attacks or dodges, it leaves a trail of light behind. Doing so made me feel like I was a mysterious hero that’s got mythical powers. In my humble opinion, the fighting is on a par with some of the best AAA games. This is an outstanding achievement for an indie studio.

After defeating an enemy, they will drop a glowing sphere and some blue crystals. Items are collected automatically and added to the counters. This is for the RPG (Role Playing Game) element of Omensight. When you are back at the world Hub – where the Harbinger receives the Omensight – the player can upgrade the Harbinger in two ways: by giving the Totem the sphere(s) collected, thus leveling up and increasing health; or by spending crystals on abilities to make the Harbinger stronger or improve its magic, hopefully making the Boss battles easier.

Omensight sets the story in the anthropomorphic world of Urralia. The bird tribes of the Pygarian Empire, with the help of the dog and cat tribes, have suppressed most of Urralia. They intend to take the Rodentian capital tonight and conquer the whole world. The scattered rodent and bear tribes, survivors of the Pygarian Empire’s assault, form an alliance to protect themselves from oppression.

These three characters will join the Harbinger to save Urralia:

Ludomir – from the bear tribe, a powerful front-line fighter with a past that haunts him.

Draga –  the leader of the Pygarian forces, but is not one for killing – would rather preserve life.

Ratika –  the leader of the Rodentian forces and a good friend of Ludomir. She channels mystical powers through her music.

There are additional characters that are imperative to the story, too:

Witch – a mystical being who exists outside of time. She is the caretaker of the Tree of Life, and acts as the guide and note-taker for the Harbinger.

Emperor Indrik – the current ruler of Pygaria and the main antagonist. Ruthless and cruel, but cares deeply about his people.

Vera – The Godless Priestess before the Harbinger. It’s the Harbinger’s mission to find out who murdered her and return her soul to the Tree of Life and keep the dark-god at bay.

Fyobor –  is a barkeep who will let you know if he is not happy. He has no friends besides Ludomir, his most loyal patron.

With a heavily narrated game such as this, it can overlook characters and not give the full attention they need to flesh them out, be that with no personality or no reason to care about a certain character(s). For example, Link from the Zelda series has little to no personality as he is a silent character. Except for his facial expressions, this makes it hard to care about Link, as he is just the reincarnation of the previous hero (well, depending on the timeline). Yes, I know this view will be controversial, but it is my opinion.

Omensight does not have too many problems, but the map is one of them. The gameplay is split into four parts of the day: Morning, Afternoon, Evening, and Night. After completing each day cycle, there is a loading screen that is the map. The map shows the passing of time with changes of the sky and the sun and shows where each character is at each part of the day. This is a good idea in theory, but in practice it is a mess. The loading times are long. I’ve seen waiting times of around 4 minutes for the level to load, and as the Switch is working so hard to load the game, the map’s framerate drops to 1 or 2 fps, making everything a jumping mess, such as character’s jumping from one part of the map to another. Hopefully, in a future patch, Spearhead Studios can optimise this.

The audio throughout Omensight is excellent. The music, for me, is outstanding, bringing forth the emotions of each character as they happen, making the battles feel that bit tenser. There is an undertone of mystery and fantasy throughout. As with other Spearhead Studio games, there is a big emphasis on getting the music right, and they have nailed it. Ratika Balalaika is so entrancing, it’s the best music in the game.

The sound effects are all so outstanding, be it the whoosh of the Harbinger’s sword or the sounds of distant battles – they all fit well and they change appropriately to what is happening on screen with no overlap. 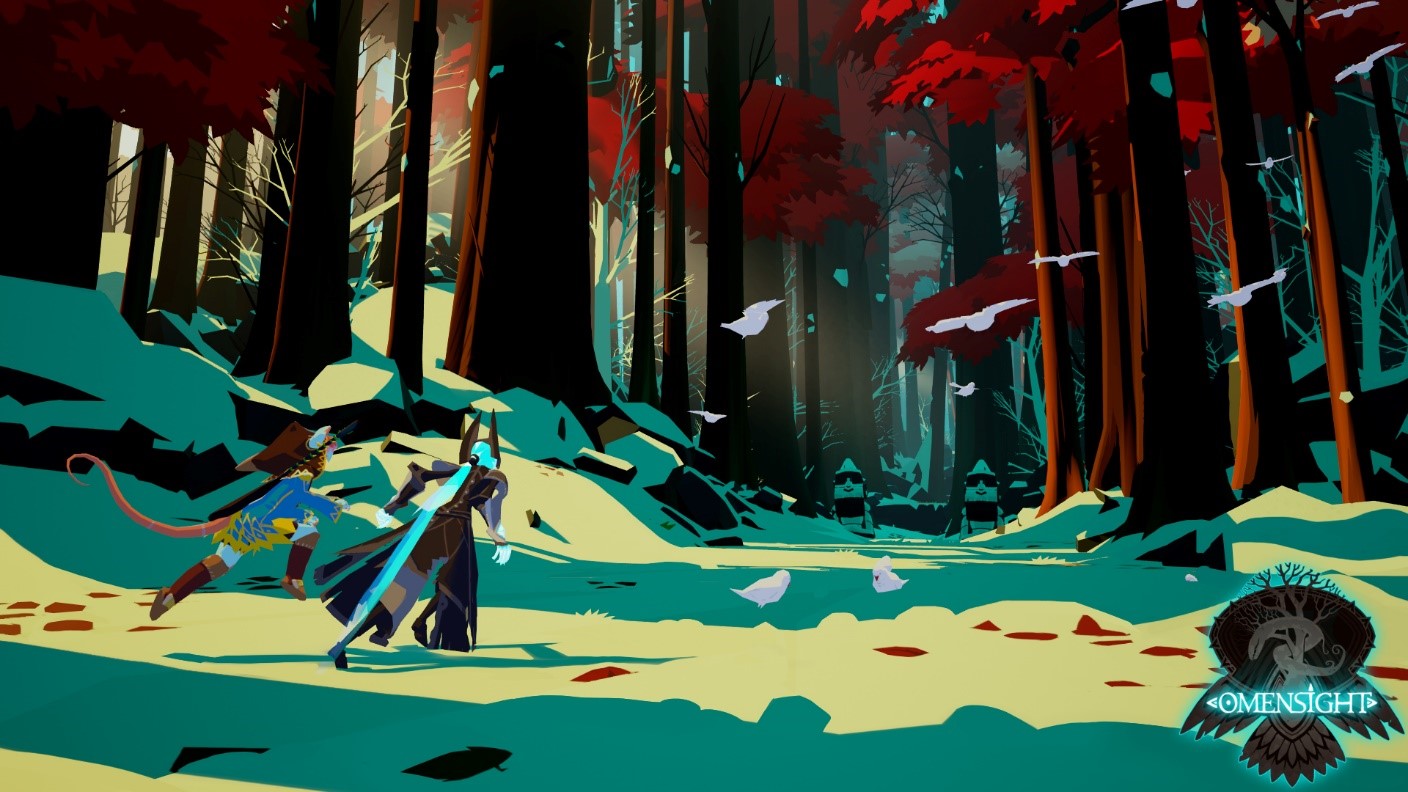 Omensight is fully voice acted, this part is the let down for myself in the Audio department. Each character is basically a generic voice. Being set in an anthropomorphic world, it would have been nice to have more distinct voice patterns to each race. It is not a big problem, more preference.

Visually, Omensight is stunning, beautiful, and invokes a sense of awe when looking at it. The art style is outstanding, low poly with a cell-shaded, washed out look, making it almost cartoonish. The world is vibrant at one moment, and the next can be dank and dull. From lush snow-covered forests, to high castle walls – it is nice to look at and has an individualised artistic choice.

The performance is fine. I noticed no significant framerate drops while playing, no music skip, or textures loading in late. As discussed above, the level loading and map have major performance problems. At least, it is only the loading screen, but it could hinder the immersion slightly.

For another game with a cartoonish art style, check out my review for Steven Universe Save The Light.

Being on the eShop for $19.99 USD/£15.09 GBP, it is an excellent price for Omensight. It’s fully voice acted with multiple endings, leading to multiple playthroughs – if that’s what you like to do – each taking around 8 – 12 hours. Spearhead Studios have priced Omensight under what they could have charged.

There is one more thing you should know: Omensight’s file size is 8.9GB – this could be a little off-putting for some players who do not have a memory card. This is one downside of having fully voiced dialogue in a game.

Some of the best Combat on Switch

No race distinction in voice