Story in Joggernauts is about a yearly marathon race called the Uranus invitational. This bunch of rag tag aliens are pretty good at running, they managed to claim victory for their team: Joggernauts!

However, an accident occurs on their ship on the way home which causes a massive hole in the ship’s hull and all of the gold trophies that the team has won flew out into deep space, landing on 3 different moons.

The C.O.A.C.H. isn’t happy and wants his cups back! So he sends down his champion runners to collect all the missing trophies as well as pick up 3 missing parts of the ship that have also broken off.  This is not an ideal situation, but they have no other choice.

Gameplay in Joggernauts is a marathon with two individual alien characters to control, either co-operative or single player, across 3 moons, each with a set number of levels to play and trophies to collect. Core concept works to a point. It’s really difficult even though there are only 3 buttons that you actual need to press.

Controls are: Y button to switch to front runner colour, B button jump front character, and down on direct pad to jump rear character.

It’s a pretty simple set-up. It’s just trying to get through colour coded levels which is real challenge.

When you first begin, you can select the play option and this will take you to the controller set-up menu. Here you can have anywhere from 1 to 4 players playing Joggernauts in couch co-op, which at its heart is where this game will shine the most – playing with others.

Remember though, it’s all local co-op, no online options are available here.

Control set-up that are available to use are: joy-cons separated, connected to the grip, as well as pro controller.

I did find the pro controller to lag when jumping which caused some unwanted deaths but it didn’t happen all the time.

Once you set all this up, it’s on to the character select screen. There are 9 characters pick from, however 3 will be locked at the very beginning.  Whichever character you pick you can also change their colours to pink, blue, green, purple – it’s hardly a huge array of colours but it’s there none the less.

Once that’s done, the control instructions are displayed and then it’s on to the map screen where 3 moons are located. Each moon has 14 trophies to collect and each has a part of the ship at the end on the selection of levels for you to retrieve.

Before you get to the ship part, you need to collect enough trophies to access the final level, so replaying levels is the order of day here if you haven’t already collected them.

You pick one available level as you move around the map in a linear fashion. There are a few detours but it’s pretty straight forward. You will unlock the next level after completing the first one and there are 3 characters to unlock on each moon. If you’ve successfully collected all the trophies in the level, you will unlock a brief bonus section at the end of the level. If you complete it, you will unlock a gold star which means you’ve 100% the level.

After multiple attempts at the first few levels, I found it to be incredibly frustrating as the speed of the characters is pretty fast for a jog and trying to jump two individual characters at different sections became frustrating, especially if you didn’t collect enough gems to unlock the level’s check-point. This means, if you die then it’s straight back to the beginning of the level.

However, there is an option to grant you more hearts, decrease gem count for check-points, and reduce the joggers’ running speed which was much appreciated!

After slowing it down, the game became manageable but still frustrating.  And while it was fun for a time if soon grew old.

Each level has multiple enemies stalking the landscape, each with a colour that’s the same as your two heroes. Your job is to simply change to the right colour of the enemy your approaching to destroy them. If successful, then the enemy will be destroyed and you will be able to continue.

However, if you hit the enemy with the wrong colour, you will take a hit and once all your hearts are depleted then back to beginning you go!

There are gems scattered around each level as you march on and timing your jumps correctly will net you a few if you are in the right colour though.  This can come in handy as the check-points in the game require a donation of gems before you can even use them. If you use the modifier options though, you can decrease how many gems are needed for these. But if you want a challenge, then why not increase the modifiers and make the game even harder… you maniac. xD

The game is really difficult in single player and while it’s nice that there’s an option to play solo, it’s not recommended as the game wants you to focus on playing with friends or family.

There’s definitely a challenge for people who enjoy that sort thing though.

It’s all about multiplayer!

The game definitely shines in multiplayer. But I found it wasn’t me who was struggling anymore, this time it was my younger cousins who found it a little too taxing to enjoy the experience completely.

I managed to get a maximum of 3 people playing it. It all began so well with lots of laughs and giggles. They enjoyed the quirky character designs and lush environments. But as soon as the levels required precise platforming or multiple swaps, it turned into a nightmare.

The laughter and giggling stopped and there was genuine emotion which abruptly turned into shouting!

My cousins found it difficult to swap at the right time or jump, especially on really small platforms which, I’ll be honest, I struggled on in the  single player.

As the characters, like in every endless runner game, never stop, judging when you need to jump requires a little planning ahead which my cousins just couldn’t get down.

Even with modifiers cranked down far as they could go, it just wasn’t enough… and the pair said they had enough.

It didn’t go down as well as I had planned.

While the game looks child-friendly, it’s still a little too challenging for some.

It’s definitely not perfect, but with the right people this could be a great couch co-op! But it may be little too challenging for some. 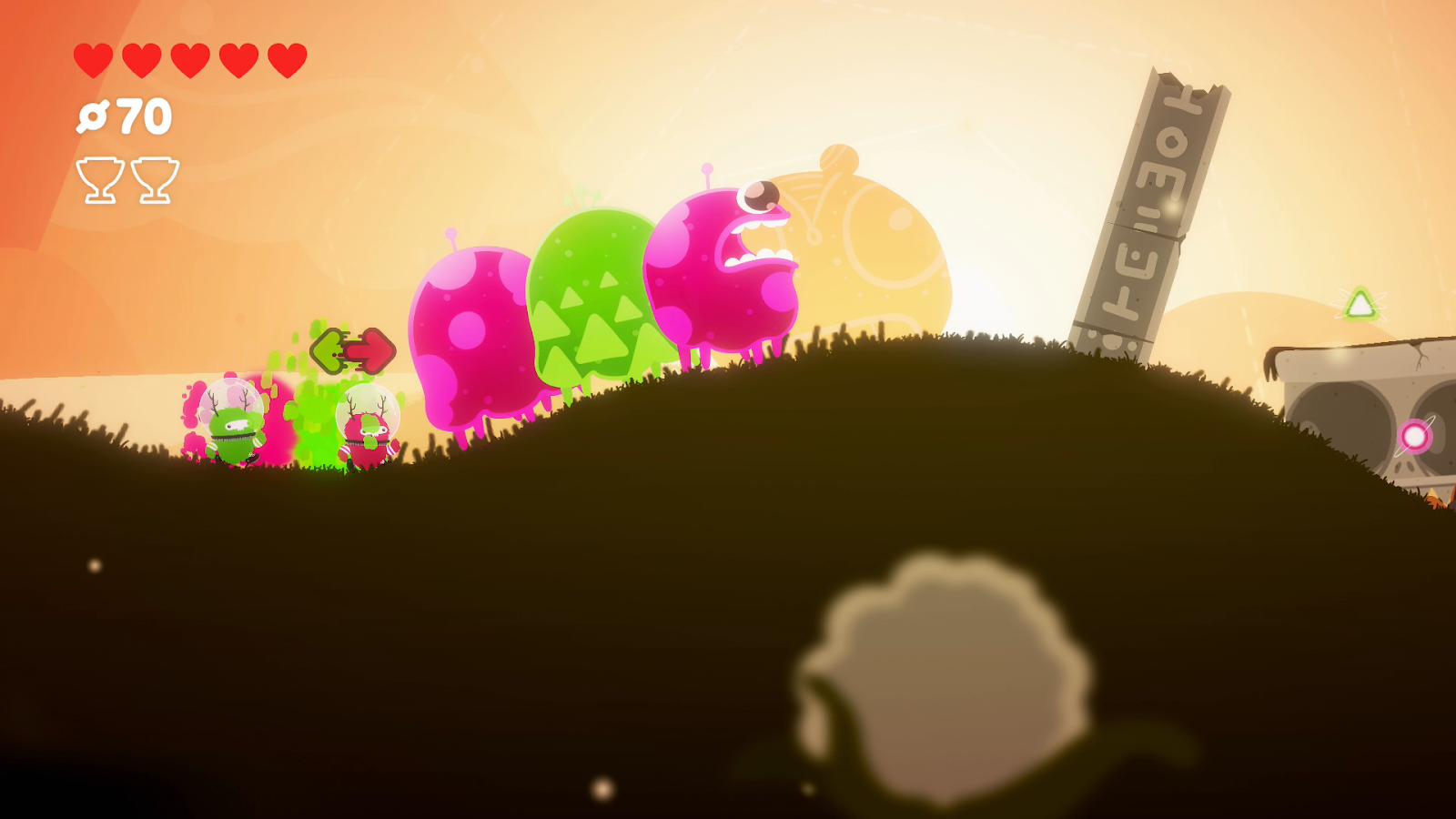 One of the biggest disappointments was the lack of content. There just isn’t enough here to warrant a £14.99 price point, and I think some people will be put off by it. Just under 20 levels, 9 characters and local play is good but not stellar. And with so many other great couch co-op games on the eShop, it’s a tough sell for me to recommend.

Music is ok. There are various different tracks for each of the 3 planets as well as different levels.

The main menu music reminds me of being stuck in a lift listening to the same track over and over again. It’s not awful by any means, but I turned down the volume at one point as it was getting on my nerves.

However, music in the different levels can be quite soothing and the sound effects are good too.

Visuals in the game are rather lively looking, with each character looking quirky and have nice designs; also, the levels are rather nice. The visual effects like falling leaves, fire flies, and really nice water fall effects really bring the game to life. Also, the visuals wherein the enemies disintegrate on contact look pretty cool especially when some of them remain stuck to the characters’ visor, and upon swapping colours, bits fly off! It’s the little details that I enjoy.

For £14.99, it’s a little too expansive in my opinion. I think the game should have been retailed for about £10.99. With a frustrating single player, local couch co-op for 4 players, cast of quirky characters, trophies to collect, and 3 planets, there’s definitely a challenge to be had here. But like I said before, with so much competition on the eShop, you may find a better bargain elsewhere.

Lots of trophies to collect

Single player can be frustrating!