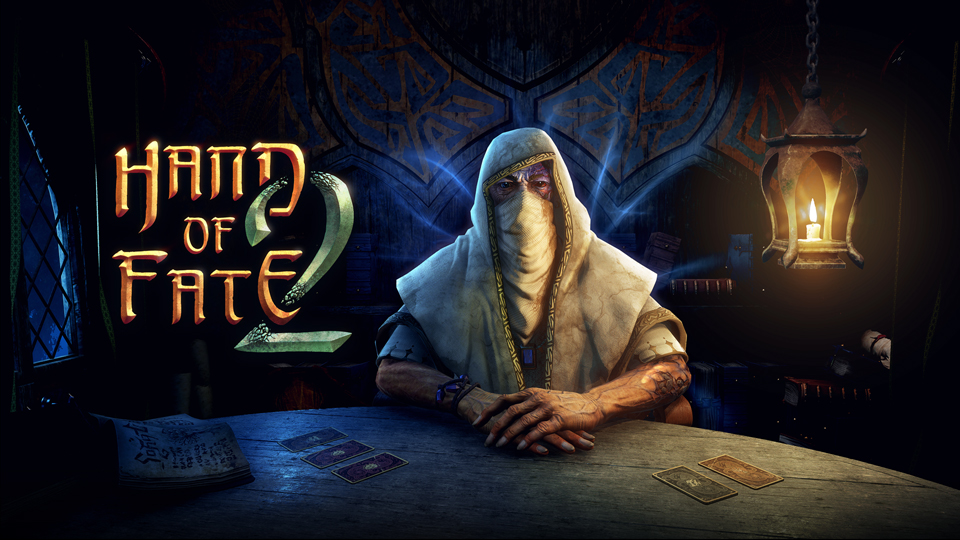 After playing a lot of video games in my time, some of them start to blend together and feel samey; It comes with the territory. That’s why when a unique game comes along that does something new, I tend to want to sing its praises and tell people about it. Hand of Fate 2 does exactly that, successfully melding the card and board game genre with a fast-paced action adventure. At first, that may sound weird, jarring, or like it wouldn’t go together, but the result is a beautiful amalgamation of genres that fits together like they were meant to be. Most of the gameplay revolves around drawing cards to play out scenarios, but when a combat section is initiated, the player is taken into a 3D real time version of the world to fight. It’s not everyday we see designers try something new, but Defiant Development deserves credit where credit is due with what they were able to do with Hand of Fate 2. 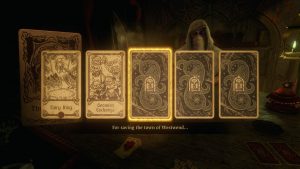 Set in a dark fantasy world, Hand of Fate 2 follows the narrative rules you’d expect – things like rescuing soldiers from a town, earning fame to wield a legendary weapon, or solving the mystery of an attempted murder. The main thing tying everything together is that the card dealer is trying to stop the bad guy, Kallas. It’s the typical nonsense you’re used to with games set in this kind of world, and honestly, that’s totally fine by me. The main hook of this is most definitely not in the overarching plot, but in the micro-stories that happen during the moment-to-moment gameplay. On your quest to earn fame to wield the legendary weapon maybe you’ll draw a card that will have you encounter a burning house in which you have to rescue villagers by rolling a set of dice; Or perhaps you’ll have to persuade a character to give you specific information and it goes horribly wrong.

These smaller stories make up a grand adventure full of diversity and oddly complex moments that frankly caught me off guard. Even if the writing is cliché, it’s still impressive how much ground Hand of Fate 2 covers. 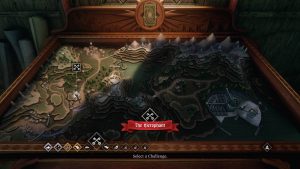 The real meat and potatoes of Hand of Fate 2 is in its diverse, unique gameplay. Because the presentation is that of a card game, you’ll be spending most of your time drawing cards and moving along a preset, sometimes randomly generated board. Depending on the scenario you’re playing, certain instances may occur; Say you’re aimlessly spending your gold on items from the store. Well, an encounter may occur that will cause damage unless you pay a fine. If you don’t have the gold to do so, you’re out of luck. There may be a weapon that requires a certain amount of fame in order to wield so you may chose to be more thorough when maneuvering around the board. 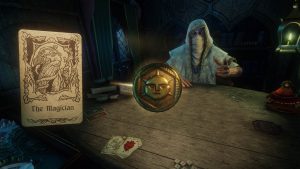 It’s so intriguing and engaging to experience such a diverse array of mechanics. There may be a combat scenario that is made significantly more difficult if you roll the dice and get lower than a certain number. Let’s say you roll and then re-roll and still get bad luck; You can equip an item that gives you an additional re-roll option. Or, during a part where you must successfully steal from an NPC, you have to participate in an odd pendulum mini game that tests your reflexes and timing.

There are 22 different missions in the main campaign, all with diverse objectives and levels of density. Some of them may take you 15 minutes, while others can reign in the complexity, and take over an hour to complete. That’s what’s so great about Hand of Fate 2: the variety keeps things fresh even after 16 hours of play.

At the beginning of each level you select from a list of cards in different categories. These cards will appear on the board during play. It behooves the player to select cards in the Encounter category that will adhere to the goal of the mission. Likewise, selecting supplies that will turn the tide of battle to make things go more smoothly is recommended. Having such a customizable gameplay experience and seeing it play out in your favor is immensely satisfying. It also forces you to be strategic with your selection and allows for freedom to try different tactics.

Once an enemy encounter is met, you’re sucked into the world and can freely attack your foes like a traditional 3D action game. The combat is surprisingly deep, allowing for dodging, blocking, and finishers. It feels like a slightly more rudimentary version of the Batman: Arkham games, which I love! Even the real time combat requires some strategic decisions from you too. You’re allowed a companion during combat and depending on the structure of the stage or the enemy type, it may be best to choose a companion AI that is more suited to that style. Even though the combat isn’t as deep or fully-realized as something like Bloodborne or God of War, it’s still features competent action that feels satisfying to play. 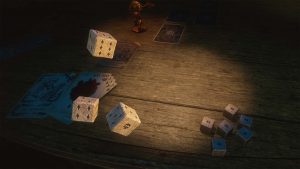 There are dozens of little nuances to account for, like the fact that your health carries over from each combat section. Having to plan out your route and make every decision count is not just a way to create mindless difficulty. It’s a means of forcing you to strategize and put your hard-earned rewards to use. It’s not flawless by any means, but Hand of Fate 2 has such a brilliant sense of progression and variety that its flaws are easy to forgive.

The effective use of sound ties Hand of Fate 2 together. Hearing your cards shuffle before they’re dealt to you, or the sound your weapon makes when it crunches against an enemy never gets old. I especially love the tone and atmosphere set by the music during the card sections. It puts me in a mood that makes me feel like I’m really at a tavern playing a weird card game with a hooded dealer who I don’t entirely trust. Even little things like a sound cue makes its way into the gameplay to let you know your finisher is ready and I absolutely love it. Its effective usages of sound design like these that stand out and make Hand of Fate 2 feel whole; Even if the voice acting is laughably bad.

Compared to the fascinating gameplay the visuals aren’t up to par unfortunately. It’s not an ugly game by any means, but it sure could use a face-lift. Some areas look okay, like the closeups of the dealer or the art on the cards; however, most of the game, especially during combat sections look like a mid generation PS3 entry. Again, it’s not ugly, but imagine how incredible this would be with the budget of a AAA title like The Witcher or Horizon: Zero Dawn. I’m sure the designers at Defiant Development did what they could and you can tell they stretched those resources as much as they could. Hopefully, if we get another entry in the series they will have a nice chunk of change to work with after Hand of Fate 2.

My other gripe is with the performance. Like the visuals, it’s not bad, but it does stutter at times, particularly while loading a new area. It doesn’t happen often but it is noticeable. The only other issue is with the long loading times. Perhaps that’s just a Switch-specific issue; it’s unclear, but having a patch that smooths things out a tad could definitely help (I say that like I know a thing about development when I don’t). In short: it doesn’t look amazing and it doesn’t run perfectly, but it’s still an intriguingly enjoyable experience. 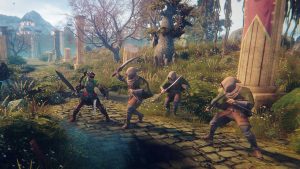 Some may take issue with the $29.99 price tag on this one, but I think it’s justified. For the amount of content in place, this is more than just a run-of-the-mill Indie game (not a knock against lower budget Indie games). There’s around 15-20 hours of playtime from the campaign alone and that doesn’t include the Endless Adventures mode that features online leaderboards. Add that to the tremendous replay value and the quest to achieve gold on all missions, and you’re looking at a 40+ hour game. I’d say it’s worth it for $29.99. 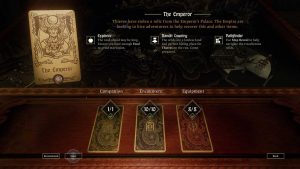 Unique gameplay (seriously, I’ve never seen anything like this)

Diverse mechanics that surprised me even 10 hours in

Isn’t visually stunning (some of these AAA games have us spoiled, I know)