The story starts with Madelyn at home, ill in bed, playing on her phone. Her grandfather comes into her room with a storybook. Madelyn is uninterested until she learns that the Heroine in the story has the same name as hers. 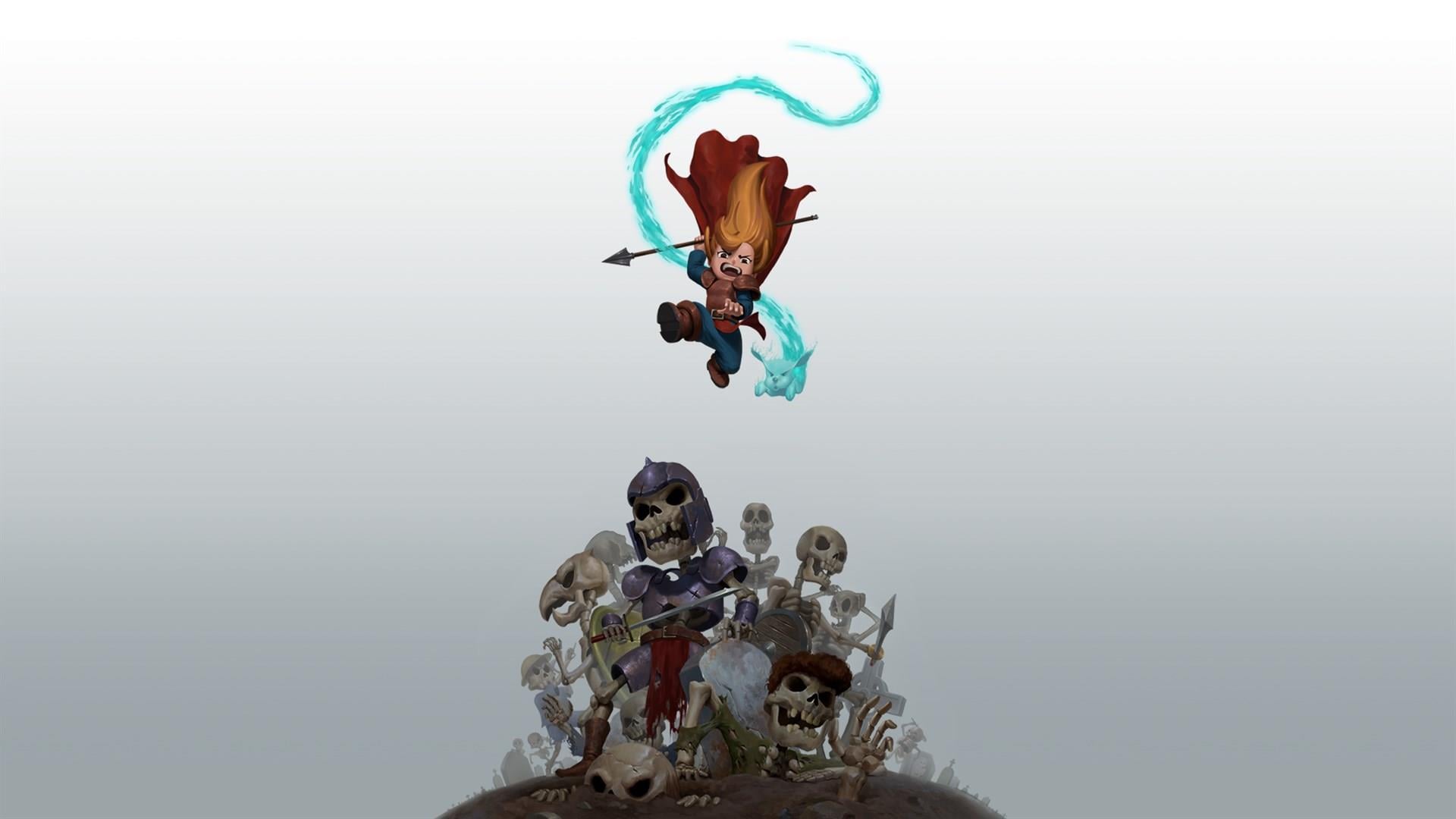 The scene shifts to our Heroine, accompanied by her faithful companion Fritzy, the dog, destroying animated skeletons to save townsfolk, until she gets to the castle and the Evil Wizard teleports Madelyn’s family away. Fritzy launches at the Evil Wizard and is killed and the Evil Wizard leaves with Madelyn distraught next to Fritzy’s body. It still upsets Madelyn after they bury Fritzy, but just before they leave the tomb, Fritzy returns to Madelyn as a ghost dog, and their adventure begins to rescue their family and to seek revenge.

Players assume the role of Madelyn and embark on a grand adventure spanning ten levels, with five areas in each level. The game itself lends heavily on the Ghosts ‘n Goblins arcade hit in 1985. Madelyn runs, jumps, and moves like the Knight Arthur from the game, with a seemingly endless supply of weapons to throw. Even the armour gets destroyed when hit, and enemies can come out from the ground, from behind, and from the backdrop to throw or drop things. You can see where Causal Bit Games got the gameplay ideas. It feels familiar enough so people like myself who played the original Ghosts ‘n Goblins (GNG) game will get a sense of nostalgia, but also has enough tweaks and tricks that it won’t alienate new players.

Speaking of GNG, Battle Princess Madelyn has two modes: Story mode and Arcade mode. Story mode will be discussed at length in the review, whereas Arcade mode is Ghosts ‘n Goblins in all but the name, and a few mechanics from Story mode. Arcade mode starts off with a shorter intro, with the family being teleported away and Fritzy dying. After that, it’s run, jump, and kill. You have one life; if you die, you are sent back to the start of the run and the maps are different from the Story mode. This is just full of nostalgia. I couldn’t help but smile when I tried this mode. Depending on skill level, this can be a long mode to complete, but it’s so worth playing. With a classic point system where you gain points for kills, it makes arcade mode endlessly replayable in trying to beat your last score. If you can finish arcade mode, that is, but if you can finish arcade mode then story mode will be a breeze. 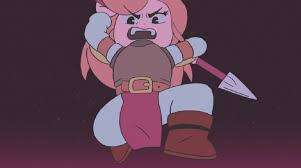 Movement and Spears Lots of Spears

The control layout is simple: up to enter a building and attack up, down to crouch. You can also attack left and right, jump with B, attack with A, cycle weapons with L and R, and enter your inventory with – . The layout is simple and tight – it works like a dream… mostly. There were times though in my playthrough when I noticed inputs being missed. It does not happen too often but can make the difference between dying or surviving. For example, I attacked an enemy on the left and another came from under the ground behind Madelyn with enough room to turn and attack, but when I tried, it didn’t work.

Attacking in Battle Princess Madelyn brings back that feeling of awe and nostalgia from the arcade for me. Madelyn has an unlimited supply of the equipped weapon, and she starts with the classic spear – I would love to know where she keeps them… Causal Bit Games, can you share any insight on that? Please let me know.

The animation for throwing is just like GNG, and you can throw weapons in quick succession. Sometimes I can throw eight or nine spears in a row, in other times, I will only throw three then stop. It seems to occur if there are no enemies on screen. When you send the undead back to the grave, they explode in a very satisfying visual that does not get old; you really get the sense that they blew up.

Side Quests, Statues, Killing, and Items

Within each of the ten Levels, there will be several side quests to complete, ranging from saving lost kids to finding a cup. Even if the quests sound silly, god awful, and repetitive, it’s a saving grace as they are fun to complete. Some are also important for the general progression of the game. The NPCs in the towns with exclamation marks above their heads have a quest for Madelyn to finish. All you get is, for instance, a blacksmith asking you to find the hammer he lost in the crypt. If you find it, he will go to the castle. The only hint you will get is the general area it can be located in.

While killing everything that moves, Madelyn will come across numerous doors that can’t be opened. This part took me a while to figure out, as I forgot what an NPC had told me. Throughout the lands are statues of a gallant warrior holding a spear, pray at the statue to get items. The item can be a weapon, special key, or a boss key. If the mission is in the area, normally you will get a key. The boss key is a “simple” matter; this special key opens a door that leads you into a smaller area where Madelyn must traverse the room to find the item or person they are looking for. Unfortunately, there is no quest log, so forgetting where a quest giver was can be a nightmare if you turn the game off for a while – that, or I am just getting old!

Sending the undead back to their graves is the one thing that will never stop. So, what do you get for your troubles? Money, in the form of silver and gold coins, and a money bag. With so many enemies, the money will stack up fairly quickly. Along with money, the undead can also drop armour or weapon shards. You can use these for upgrading, with money used to pay for the upgrades. Scattered throughout the levels are ceramic pots and you can get items from these too, so kill and destroy everything.

Battle Princess Madelyn is a Metroidvania game that is inspired by GNG, so there are lots of jumps and platforms to reach. With all good Metroidvania games, there are places within each area that are unreachable without the right items. For example, jumping boots, after beating a boss, allow Madelyn to double jump. Almost every area has platform jumping. It’s a good thing the controls are tight and responsive, and it feels natural to do so. Besides normal jumps, Madelyn can attack in the air, throw spears in the direction she is facing, or press down while in the air to attack downwards – I was surprised how much I used the downward attack. If any of the readers have played a metroidvania game, then they know that backtracking is a big part of the game, and it is the same here too. You can traverse the levels one by one, back to where you want to go. This can be frustrating and time consuming, so within each level, there is a teleport stone that will allow Madelyn to jump to a town in the level. There is only one in each level. This will help reduce time in backtracking and I welcome any helping hand to save time.

Madelyn will die a lot, this is unavoidable. As in GNG, not paying attention for a mere second can be the end of you. Also, to ramp up the difficulty, there is no way to look down. Some… okay, more like a lot of jumps down are blind, so cross your fingers that there are no enemies down there like those bloody fish. Unlike games such as GNG, Madelyn is a little more forgiving. 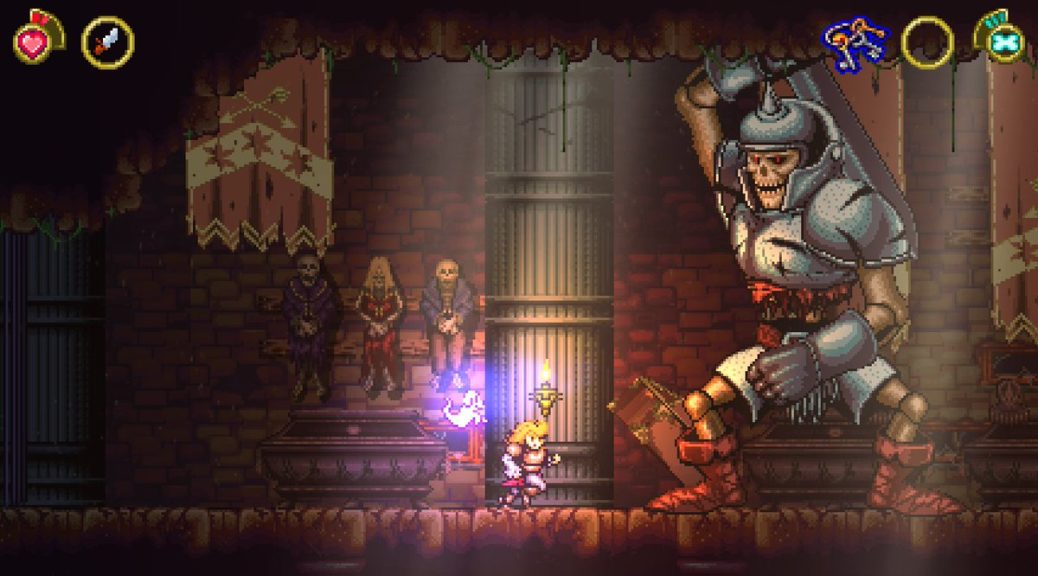 In the top right of the screen, there is a green bar. Every time Madelyn dies, it will resurrect her in the last place she was standing. Upon resurrection, a blast of lightning will kill any enemies that are too close. This stops that annoying problem in some games where there is a possibility of being hit or killed as soon as you’re revived, plus it looks nice, too. If you die too many times and deplete the bar, the game will send Madelyn back to where you entered the area. It’s not game over, you just need to make it back through the level. If it is a boss fight and you die, Madelyn will be placed back outside the door. The green bar is replenished by killing everything; some enemies will drop a little blue ball that will fill up the green bar by one square, up to six. Being aggressive and killing everything is overly important as there is no way to refill the health bar, though the health bar can be increased from its initial two, up to six, by upgrading armour.

In Battle Princess Madelyn, bosses are a big part of the game. They are all different in terms of looks and move sets, and there are thirteen of them. My own personal favourites are: the first boss, a giant Skeleton, for its magic hand side step; and a rabbit in a giant rabbit robot that drops carrot bombs – it’s deadly and cute. The bosses all have their own attack patterns and moves. Each one is so much fun in trying to figure out the best time to attack and when to dodge.

Madelyn’s faithful dead companion, Fritzy is the Swiss army knife of ghosts, as he can collect the dropped orbs and keep you from drowning in the water. Also, for a ghost, he is damn cute. I want my own Fritzy. One last thing: later on in the game, he may have more uses.

The best part of audio is the music – it is beautiful. It never feels out of place, and the same can be said for the explosions. In the options menu, at the start, the sound track can be changed from orchestral to arcade, for that retro sound. The rest of the audio is nothing special or particularly bad – it’s in the middle ground.

The visuals are reminiscent of the old arcade games. Scan lines can be turned on or off, depending on your personal feelings towards them. The game plays smoothly, both in hand-held and in docked modes. Now, to address the delays: there were some technical hiccups regarding the Switch version, but the guys over at Causal Bit Gaming have worked tirelessly to fix it. There was a patch sent out days before the eventual release date, and I can say it fixed all the problems I was having while playing. It’s good to see developers so passionate about their games that they will delay release to make sure everything is fixed.

Priced at $19.99 USD/£15.79 GBP, Battle Princess Madelyn is well worth the price tag. There’s plenty to do and around twelve hours of gameplay in Story mode, including all the side quests and bosses. Arcade mode is so similar to GNG, so replayability can last as long as you are good with it.