VSR is solely a gameplay-based racer. There is no story or characters or anything other than mechanics. That’s totally okay because most people don’t play racing games for the story. What it does have is a different take on the space racing sub-genre. Unlike most racers, there is no track or anything, because it’s set in space. You are able to navigate freely in a 360 degree radius.

To complete laps and get through the race, rings appear on-screen to show you where to go next. If you’ve ever played Grand Theft Auto, you’ll be familiar with these checkpoints. What’s helpful is that the rings are color-coded to keep you on track. The upcoming ring is red, while the next one after is blue, signifying the correct order used to proceed. Aside from the odd choice of having the upcoming ring be red (red is typically a bad sign), the rings are often in weird places in relation to one another, making it difficult to navigate the levels. 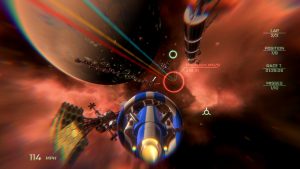 The point is that it’s non-linear because it’s in space, but the controls make it hard to even manoeuvre through the stages, let alone collect the rings. While I realize that there is a bit of a learning curve, and I did manage to get the hang of it, playing VSR doesn’t feel natural. If the next ring is above or behind you, you have to stop your ship and turn to aim towards the checkpoint to have a chance at collecting it. In other words, you can’t just continuously go fast, because you’ll drift too far from the ring and you won’t be able to win.

I realize that most racing games don’t allow you to just floor it and go as fast as you can 100% of the time, but with VSR, you have to stop to align yourself with the next checkpoint; That constant interruption ruins the flow of a genre that is supposed to be fast-paced. Once you do get the hang of it, it’s fine at best. I never felt satisfied or inclined to go back because of how it feels, and the lack of a reward system. The only rewards are the ability to unlock new stages if you win the previous race.

There’s also a local multiplayer mode that allows two players to compete with one another, which is probably where the bulk of the fun is. Even a mediocre game is better with friends, right? 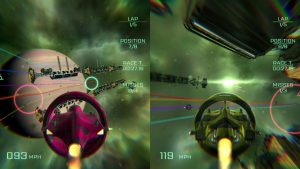 Like a lot of these smaller Indie games, the soundtracks are usually pretty solid; That’s exactly what you’ll find with VSR. The thrilling electronic soundtrack has a mixture of upbeat aggressiveness with the ethereal nature of being in space. That’s a weird combo, I know, but it’s cool to get pumped up while speeding through space, even if the controls aren’t great. The soundtrack is easily one of the best parts of VSR. 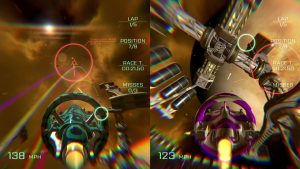 Even if VSR isn’t the most fun to play, it has some beautiful visuals. I’m a sucker for space, which is why the mixture of bright, vibrant ships with the blackness of the universe is so appealing to me. I’m not an astrophysicist, but I know a beautiful, colorful-looking galaxy with splashes of reds and purples when I see one. It’s just interesting to see such a colorful take on outer space, while still keeping things realistically rendered. Aside from nature, there are multiple satellites and asteroids to weave in and out of that expand the already beautiful color palette.

I’m not sure what kind of technical fidelity is going on under the hood, but I had no performance issues, whatsoever. Perhaps there isn’t much going on, which is why it runs so well. Either way, it’s nice to see a racing game that runs as smoothly as this does. 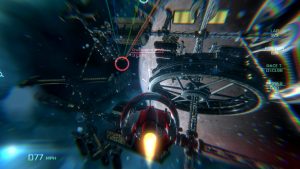 Here is one of my biggest issues with VSR: The value. It’s so tough to judge a game’s price because I know development is not easy and that even a badly-made game still required effort to produce. The fact remains that consumers have limited budget and time, and I don’t think VSR is worth either. At the $10.00 price-point, there just isn’t enough content here to justify the purchase. Maybe if it were $5.00, I could think about recommending it, but with all the better games being released on the eShop, VSR gets a hard pass from me.