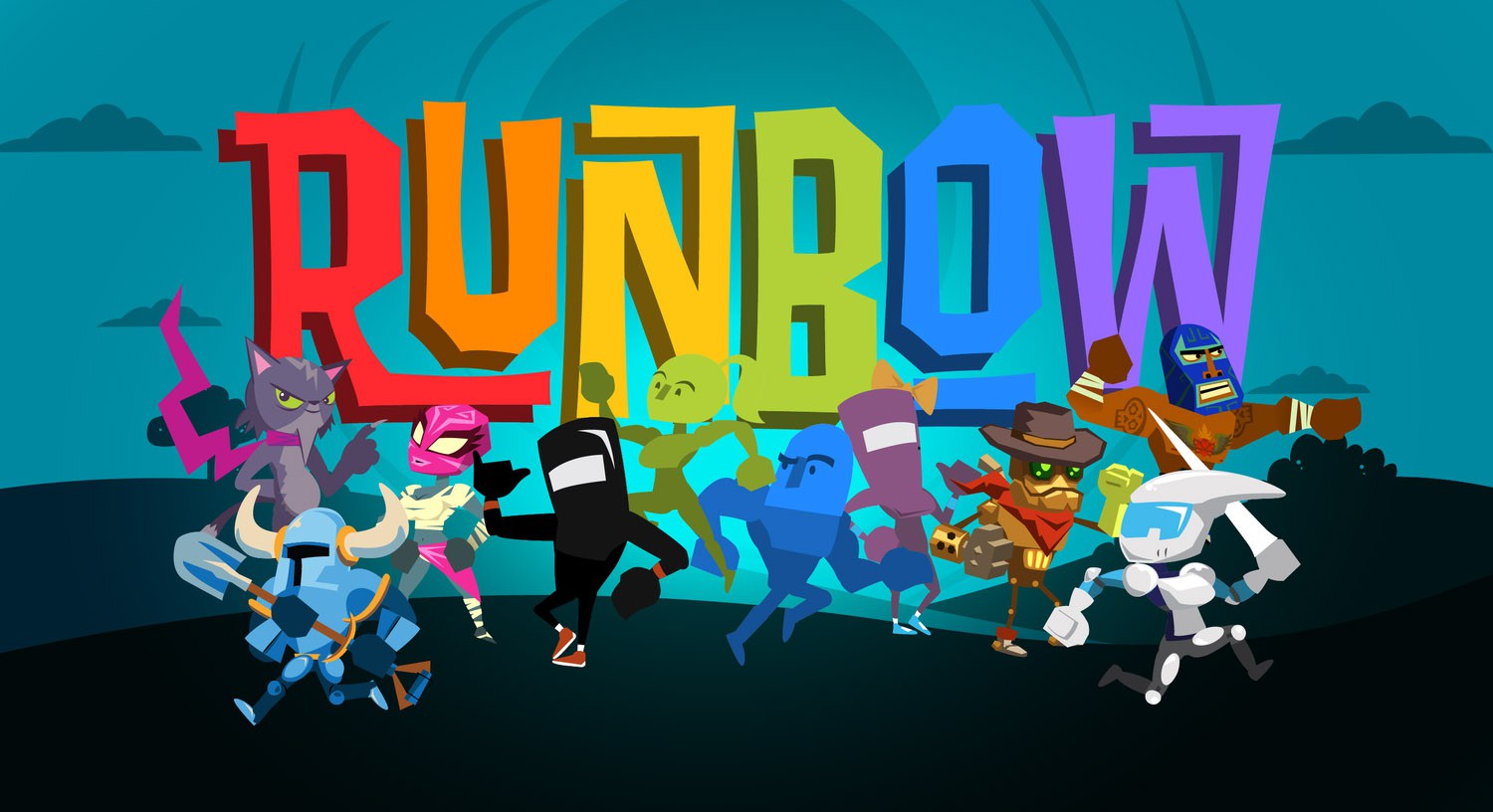 It seems like each year we get a handful of top-notch Indie games. 2014 brought us Shovel Knight, in 2015 we got Undertale, 2017 had Cuphead, and now in 2018, we have the pleasure of playing Runbow. Describing Runbow isn’t as simple as slapping one genre on it and calling it a day. The core mechanic is platforming, but there are many different elements on top of that. There’s a splash of racing, a bit of brawling, and a major focus on competitive and cooperative play. Because of the sheer variety in gameplay, the colorful art style, and the incredible music, Runbow could be in the running for one of the best games of the year. 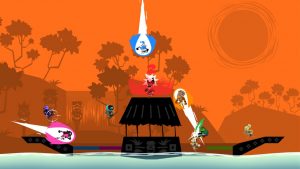 What makes Runbow unique is it’s gameplay. Sure, the core mechanics are platforming, but there’s a little interesting feature that spins it on its head; the backgrounds are constantly changing colors, along with the platforms that can be jumped on. Because of this, depending on the combination of colors, certain platforms can disappear, challenging the player to think twice before going through a series of jumps. This seemingly minor little detail is actually monumental while playing. There is a constant element of strategy added to the already fast and hectic gameplay.

What’s more is that there are almost an overwhelming variety in the level styles. Some of them task you with simple jumping, while others literally flip the entire levels upside down and make you go through them backwards. I never felt like I was bored or tired of seeing the same level types over and over again.

Runbow offers one of the most robust platforming single-player modes I’ve seen in a while. It’s massive! There are dozens and dozens of levels with a diverse variety of mechanics and visuals. What makes this addicting is the rating system, featuring three medals that can be earned based on the time it takes to complete each level. I love how earning three medals isn’t too overly difficult like some games. The accessibility makes Runbow hard to put down. I can’t even remember how many times I would restart a level after completing it, after narrowly missing three medals. Other time-based games should take notes here. There’s no need to force players to be so pixle-perfect. 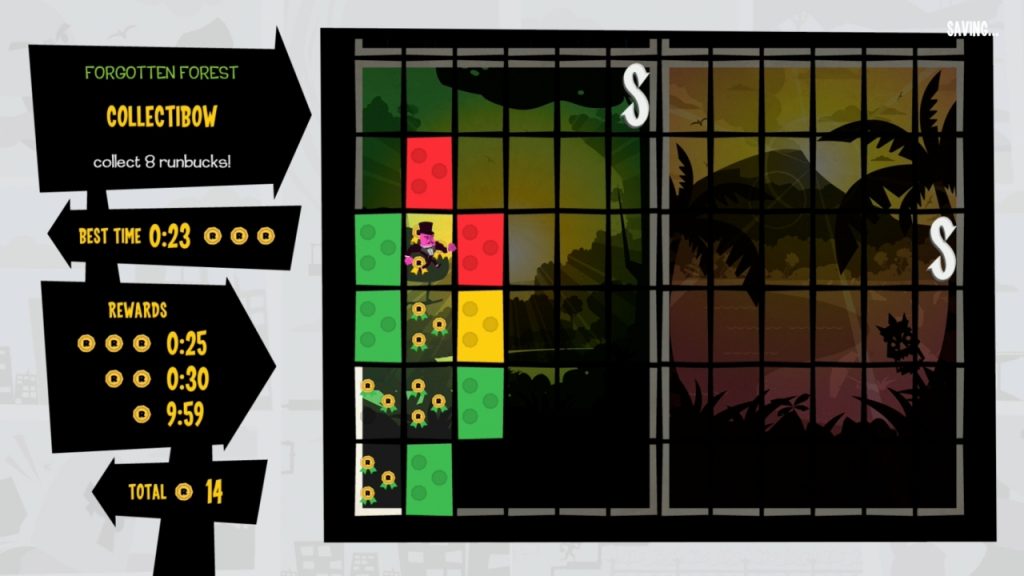 At the end of each section is a boss, but they aren’t implemented how I expected. Instead of a long drawn-out, combat-heavy fight, the levels are still designed around platforming. The entirety of these levels are spent simply getting to the boss, which can be defeated with one punch to the face. Don’t be fooled, though; these levels are some of the most challenging in the game and will test your patience and endurance.

Developer 13AM Games even went above and beyond with the design of the menus, as well. With such a fast-paced gameplay style, it’s important for the menus to be equally as quick to navigate. Restarting levels happens almost instantaneously, despite needing two button presses (+ then A) to initiate. It would be nice to map the restart input to just one button press, but the menu navigation is still faster than a lot of games. Additionally, there is no text within the tutorials; all of them are presented with intuitive, nifty pictographs. I know this doesn’t matter for the overall experience, but it’s just something you don’t see often. 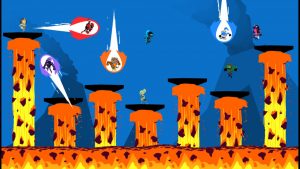 I’m a sucker for unlockables and Runbow delivers on that front, as well. There are numerous characters to unlock, one of which is Shovel Knight! (Sidenote: Shoutout to Yacht Club Games. Shovel Knight is incredible.) On top of that, you can even gain access to art gallery images and songs. I was constantly unlocking things throughout my 8 or so hour journey through the single-player mode.

I didn’t spend much time with it because I kept having connection issues, but the online mode is a ton of fun when it works. Supporting up to nine players online or eight players offline, Runbow emphasizes multiplayer just as much as single-player, creating an even more complete experience. That isn’t to say single-player games aren’t complete, but it’s nice to accommodate to different player preferences. 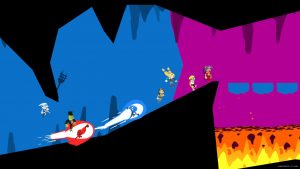 As if I didn’t have enough good things to say about Runbow, the music is EXCELLENT. The upbeat, orchestral soundtrack makes the past-paced platforming even more engaging. Some of the songs gave me a Polka vibe, which normally would be a turnoff, but it creates a happy, “you can do it” vibe that I appreciate. As somewhat of a music nerd, I notice the odd time signatures and unpredictability of some of the songs. I even love the pause music, which is admittedly elevator-y, but I’m a sucker for some smooth, relaxing tracks like these. In short, this soundtrack rules. 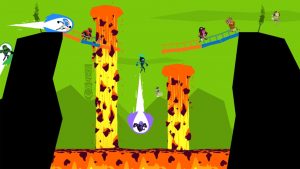 As I touched on earlier, the visuals play an important role in the mechanics of Runbow. That in and of itself is interesting, but to add to that, the art is simple and elegant. Many of the assets are all flat with one color, giving off a charming vibe with personality. Not everything needs to be realistic to be good and Runbow is proof of that. I especially love the quirky animations and weird, almost comic-book style art that can be found in the art gallery.

13AM Games mostly nailed the performance of Runbow, as well. There were no frame-drops or issues of any kind while playing offline. I did encounter some connection issues during online play, but I’m not so sure how much that has to do with the developer versus the Nintendo online infrastructure. Perhaps it’s a little of both, but like many Switch games, the online needs some work. 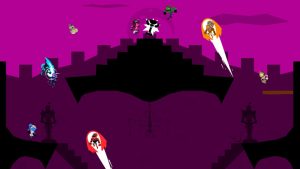 When I found out Runbow is only $14.99, I was shocked. For the amount of content here, I could easily see this being a $40 or $50 game. With over 100 levels in the single-player mode, an entire gauntlet of challenges, local multiplayer and online multiplayer modes, this is a hefty package with a generous amount of content.

If it isn’t already clear, I love Runbow. The catchy music, the interesting combination of art with gameplay, the amount of content and the tight controls make this an incredible achievement for 13AM Games. It still blows me away that this is only $14.99, so with that, there is absolutely no excuse to skip this.

Interesting mixture of art and design

Best Bargains on the eShop – Look At Them Deals!

Runbow is getting a physical release on Switch!