Enter The Gungeon kicks off with a story about a mysterious bullet shaped craft crashing into a fortress and bringing with it a relic of unquantifiable worth. You choose one of four playable classes and set off against the odds to find the relic – a fabled gun that can kill the past. Each of the characters from the Marine to the Hunter has a reason to blast the past and so after a short intro to the games mechanics you set off into the roguelike Gungeon to face a set of bullet and gun based enemies on your quest, along the way you stumble upon a number of hilarious bosses, vendors and countless things to shoot. Welcome, to the Gungeon!

Enter The Gungeon featuring a unique soundtrack from Doseone with 30 tracks providing over 85 minutes of high energy electric music that has elements of synth wave and inspiration from the sounds around guns and ballistics such as a gun cocking and firing. My personal favourite is track number 2 – Lead Lords Keep which really made me feel like I was on an epic dungeon quest and yet has something of the mystical about it. The sound effects are satisfying and with a big range of weapons its nice to have different sounds to the many different guns albeit there is some repetition. Shooting stuff sounds right and the mobs make the odd grump or whimper at the right times.

The game is set in a top down 16 bit style reminiscent of old SNES games like Zelda, in fact the cartoony style of enemies and the bright sprite based movements of things like lamps reminds me of the same games. For a game thats ultimately set completely in a dungeon I personally like the visuals, they are bright in places and dark and dungeon like elsewhere. A common theme throughout is the hilarity of realising that almost everything is a gun or something linked to a gun. Just on the HUD your health is shaped like a bullet, your currency is a bullet as are your specials and your enemies are mostly shaped like bullets as well – from the regular bullet mobs to spooky bullet ghosts or hilarious oversized bosses wielding massive guns or riding bullet chariots. Even smaller details like the pattern on floors that light up to become your transport from place to place are shaped like a revolvers chamber. There are subtle visual details that add to the game as well – in library style rooms your bullets will fling books into the air and their pages will float to the ground, smashing through objects will shatter them and other small visual cues like this add a little something. Some might say that the graphics are not particularly beautiful and as a dungeon setting Enter The Gungeon repeats landscapes, they are correct though I find the rooms to be better drawn than almost all other roguelike randomly generating games.

The game looks great on the move as well and I experienced no slowdown, something that I have seen with some other Indie ports so I am pleased to see the game looking great on the go.

Enter The Gungeon is a twin stick shooter set in a roguelike top down world that has you working your way deeper through a series of rooms topped off by a boss at the end of each floor. Its a simple premise that plays extremely well due to its high level of refinement, attention to detail and the ingenuity of and breadth of its systems. The control scheme has you moving around with the Left Stick and aiming with the Right, aiming is just the right balance between stickiness and requiring skill to make it feel awesome. You shoot by pressing down R for something like a Rifle or holding R for something with a larger clip and rate of fire. You need to manually press down A to reload your weapon which takes you out of action temporarily and the most important of all – the Dodge Roll by pressing L. Using the Roll lets you temporarily avoid damage by presumably ducking underneath gunfire. The simple control scheme is balanced just right and many of your foes require a well timed roll in order to avoid their attacks, you start the game with a slightly different load out depending on which of the four Gungeoneers you chose but whichever you chose you will have a basic weapon that can only shoot so many bullets before needing a reload – generally its just the right amount to be able to kill one to two basic mobs if your aim is quite precise. Once you get into a rhythm you get the hang of moving around and shooting your mobs, ducking as required and reloading on the fly – it feels great and as you progress you will stumble upon a whole host of improvements that load out your Ammonicon, the history of all collectibles gathered. You can stumble upon new weapons, passive abilities and an active ability that is used by pressing down ZR as well as Blanks which stumble all mobs on screen by pressing down both Sticks at the same time. The delight in Enter The Gungeon is in the depth to these improvements, some of them are those you would expect – shotguns and rifles, pistols and automatic weapons but you will find any number of additional weapons such as the D Pad – a weapon that shoots in four directions at once but you can also enter to combos to shoot fireballs or the Skullspliter that fires off homing Skulls. Passive and Active Items are just as varied letting you level up any basic gun into a beast or adds lightning to your shots. Enemies are also fun and varied with lots of different attack patterns to get a hang off not to mention the 22 bosses that spawn semi-randomly at the end of each floor. These bosses offer a stiff challenge with bullets and debris flying all over the map and are a joy to face. The game is difficult and progressing through its levels won’t happen right away, you will likely die many times and will face a bunch of different scenarios as you start to fill out you Ammonicon and due to its balance the game keeps you interested in playing again. The game manages to keep you invested whilst not taking itself to seriously and this balance is hard to find. 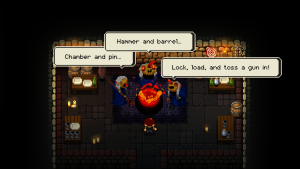 Enter The Gungeon is $14.99 in the US and £10.99 in the UK offering a whole bunch of replayability with secrets, additional playable classes, multiple endings and your Ammonicon to fill out you can get your value out of this one. There is limited multiplayer and no online play here but the single player mode here is vast and the developer has confirmed new content is coming in early 2018 with free DLC.

Even More Pixel Art Games That Deserve Your Attention

Best Bargains on the eShop – Do a Barrel Roll!