I finally got my hands on the Switch version of one of the most beloved Wii U games, Captain Toad: Treasure Tracker. Thankfully, Nintendo has realized that there are a lot of fantastic Wii U games nearly everyone missed because of the abysmal console sales figures. Treasure Tracker was one I was hoping would get a second life on the Switch, and I’m so glad it’s exposed to more people now. What a delightful, smart little puzzle/platformer. And, yes, it is a platformer despite Toad not being able to jump. But what makes this one of the most unique games in Nintendo’s library? 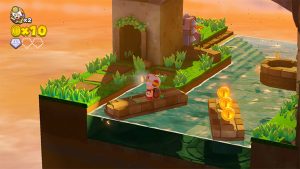 This is normally about the time when we discuss the game’s narrative, but seeing as Treasure Tracker is mostly mechanics and systems-based, the hook is not with its story. But not to worry, because what Treasure Tracker lacks in narrative it makes up for in some of the most beautifully simple, satisfying and accessible gameplay available on the platform. The words “accessible” and “simple” might be a turnoff to “hardcore” gamers, but rest assured that Treasure Tracker is alluring because of how unique its gameplay is.

Like other games in the Mario universe, this one is broken up into levels. Each level features a floating block of land in which you can rotate the camera completely around it to get a better look; Not unlike a Rubix-Cube with moveable platforms and hidden corridors. The goal is to get Toad to the gold star to complete the level. The simplicity is always present, but getting to that end goal can become complex.

Since Toad can’t jump getting from point A to B may require hitting a series of switches to unlock doors or raise elevators. Combine that with trying to maneuver around enemies, with a mixture of stealth as well as a robust collectathon and you get a varied compilation of Nintendo goodness. 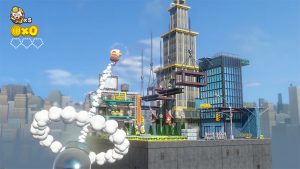 To extrapolate on that, Treasure Tracker strikes an important balance of pacing with a sense of reward. With this being on Switch, it’s safe to assume lots of us will be playing this on the go which it lends itself perfectly to. Levels are short and can be completed in a matter of minutes. Because of that it’s hard to put down.

Once you start trying to complete all the challenges within the stages that’s where the real fun and sense of accomplishment comes. I’m usually not a completionist (simply because I don’t have the time), but I felt compelled to aim for 100% completion in Treasure Tracker. It’s just accessible enough to make it easy to get into, with the goals being achievable and satisfying. Many games fail at this, unfortunately.

But what about those collectibles and in-game challenges? Each stage contains three hidden gems to collect. Some are out in the open and hard to miss, while others require specific actions that only the most thorough players will find. These remind me of the moons in Super Mario Odyssey, and to those of you who have played that, you know how addictive this can be.

For the harder to find collectibles, they may require you to do things like finding a hidden hammer that will allow you to break down a wall, leading to a room with a gem. Or maybe a hidden gem will be rewarded upon defeat of a tough enemy. Perhaps you’ll find yourself seeking a gem that will put you in a high risk/high reward situation. The variation here shines so brightly. Beyond that, each stage has a specific challenge, like sneaking past all the enemies, collecting a certain amount of coins, or performing a certain action fewer than X amount of times. These challenges encourage you to play differently and because of their simplicity, you may be inclined to do so.

Aside from the normal platforming scenarios, there is breadth in the different themes and actions that can be performed. For example, an on-rails (literally) mine-cart stage that has you shooting at enemies and blocks is one of the most memorable. Or maybe you fancy finding the cherry item that creates a second playable Toad to complete puzzles easier. I won’t spoil what Treasure Tracker has in store for you, but just know that there’s way more to this than just moving platforms and unlocking doors. 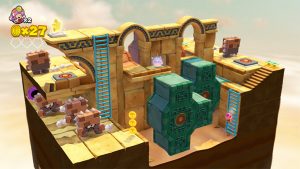 The final point I’ll touch on are the boss battles; wow, these are entertaining and give off a major sense of scale. I love how they come in two parts: the lead up to the fight, and the fight itself. I use the term “fight” loosely, because Toad isn’t much of a fighter. These stages are huge and require a bit more precision, since timing is more of a focus. The bosses overlook the levels and will try to take you out in various ways.

Upon arrival to the boss, defeating them is as simple as throwing an object at them three times, or knocking a huge block on their head. These may not be the most challenging levels, but it is exhilarating trying to get to the bosses without taking damage. And if nothing else, the music is weird and catchy, which is to be expected, coming from Nintendo.

Let’s be clear here, Treasure Tracker’s soundtrack doesn’t reinvent the wheel, but it does a good job of immersing you in the world. There is a sense of wonder that can be found with this orchestral soundtrack, effectively setting the tone and keeping you engrossed.

Aside from that, hearing Toad scream after he takes damage is morbidly humorous. That’s about the extent of the voice acting, which is fine by me. 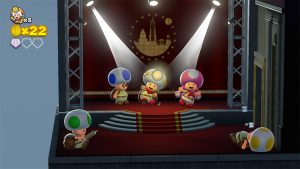 My goodness, it never ceases to amaze me how polished these first-party Nintendo games look. If you look at the variation in the enemy design, you might be impressed too. One of the enemies is a giant bird, and although he’s a bad guy, he emits a fascinating combination of being adorable mischievous. It’s what Nintendo does best, introducing us to some of the most vibrant, colorful cast of characters.

Whether you’re playing on the go or docked, Treasure Tracker stands out with its level variation, too. Some of the stages are beach themed, or take place in a haunted house, similar to Luigi’s Mansion. My personal favorite is a level that has Toad sneak past enemies aboard a speeding train in the snow. But maybe you fancy a dragon boss battle in a pool of lava. Whatever your preference, there’s probably a stage for you.

If you’re a Super Mario Odyssey fan, you’ll be pleased to know that Treasure Tracker includes some stages from that game, like the fan-favorite New Donk City level. 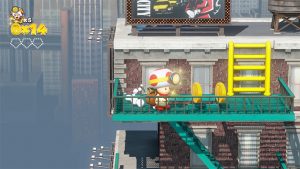 It’s always good to see publishers experiment with different prices and that’s the case with Treasure Tracker. Coming in at a cool $39.99 price-point, this has all the cuteness and wit of a full-priced Nintendo game, without breaking the bank. As for the content, it unfortunately can be completed in around five or so hours, but at that budget price, it softens the blow.

Additionally, there is co-op functionality that allows the second player to shoot turnips at enemies or blocks. To be frank, playing this way almost breaks the game because it eliminates any threats that would ordinarily stand in your way. It’s best to save this mode for after you finish the base game.

Captain Toad: Treasure Tracker is one of my favorite Wii U games that deserves a second chance on Switch. The vibrant art, catchy tunes, unique gameplay, and less expensive price make this a no-brainer to pick up. If you’re looking for something different and skipped this one on Wii U, I cannot recommend this one enough. 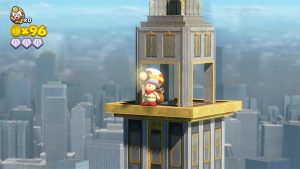 Could be perceived as too easy

LEGO Super Mario May Be a Real Thing

Nintendo Needs to Milk its Nostalgia

Nintendo Switch Review: Year One Was a Wild Ride