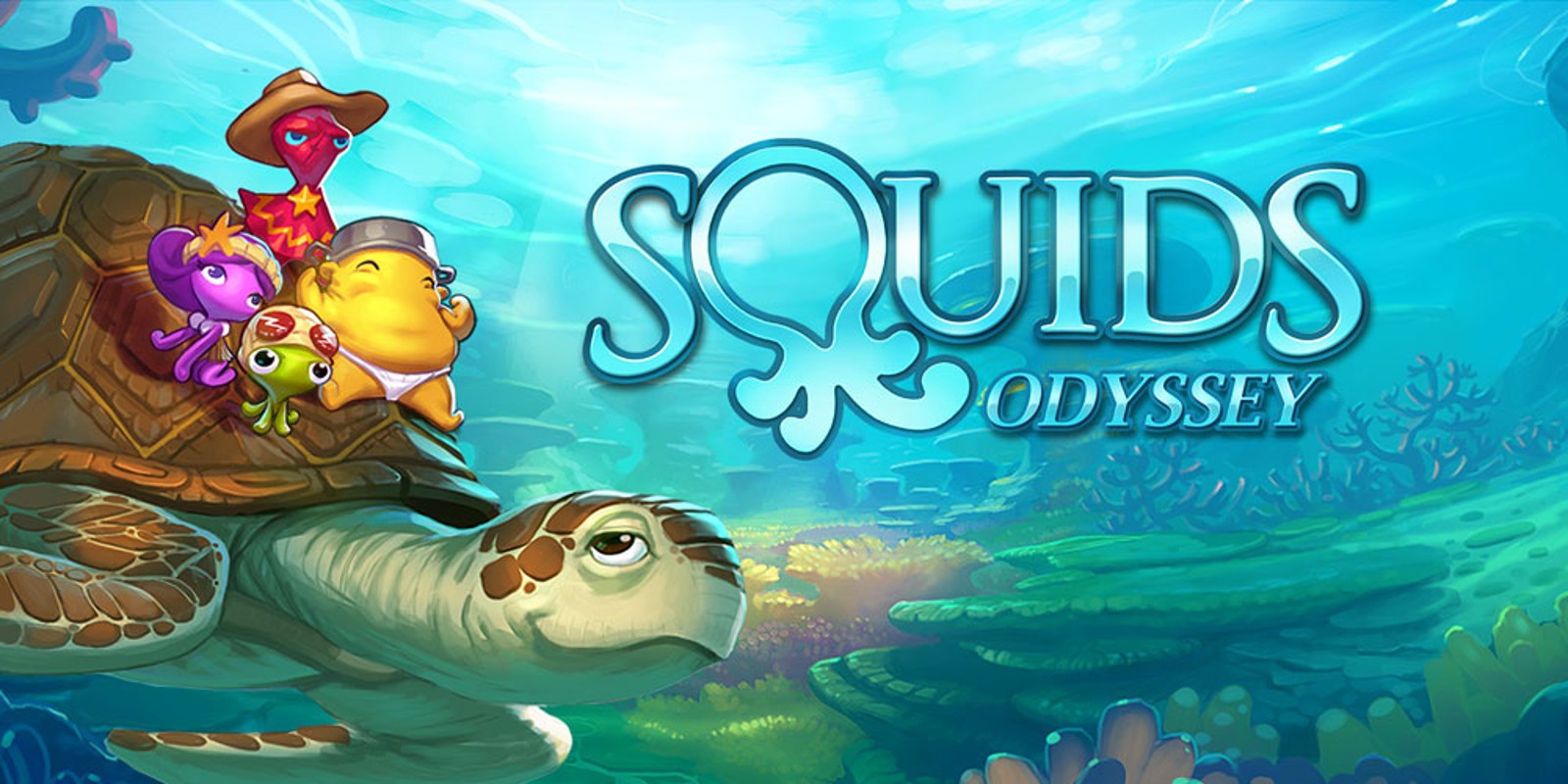 Game code provided by The Game Bakers for review

During a time when it feels like many releases lack originality, Squids Odyssey feels like a breath of fresh air. Not many games can successfully pull off the mashup of turn-based RPG, physics-based combat, and cute art style, but this comes pretty darn close. It doesn’t always work, but when it does, Squids Odyssey stands out against much of the shovelware we see on the Switch eShop lately. Squids Odyssey is actually a port from the Wii U and 3DS, but now has a second chance to shine with its release on Switch. Right off the bat, it’s clear the Switch is the best place to play this, successfully mixing touchscreen gameplay, with portability, while still keeping up the visual fidelity. 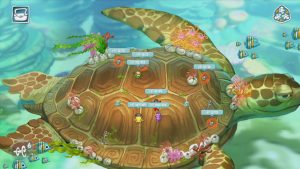 Whether you love this or hate it, you have to admit there isn’t much like Squids Odyssey on the market. How many games have a core mechanic that involves pulling back on a squid’s tentacles, shooting it across the level, and knocking it into enemies to cause damage? Much like a rubber band, the foundation of the gameplay is entirely based on slinging your party of squids across the map in a turn-based format.

This may look like a rudimentary iOS game, but the mechanics are surprisingly complex. There is an ocean-sized amount of content (here come the ‘sea’ puns), with over 90 levels containing many items to collect, various enemies to defeat, and objectives to complete. Depending on your party of squids, you may have an easier time completing these objectives. That’s right, you get to pick the members of your party, similar to Final Fantasy. It may seem odd comparing it to a fantasy RPG, but there are similarities. Each squid has a unique ability and depending on the objective of the level, you may want to adjust your party accordingly. 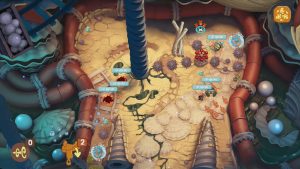 There’s a squid that can heal other party members, one that can slam down and cause devastating damage, and a cowboy squid that can shoot enemies with his revolvers, among others. This diverse cast of characters allows for much more depth and strategy than I had expected. There were times when I was stuck on a level and was forced to experiment with various party combinations. Once I finally got past the hump, it was immensely satisfying.

Squids Odyssey can get challenging and at times, it feels like there isn’t much given to you to prepare. For instance, each character has a stamina meter that coincides with the amount of movements that can be made. If you miss a target or get sucked into one of the many traps within the environment, it can lead to an instant, frustrating death. On top of that, even early on, enemies are difficult to take down and dish out even more damage than you can. It isn’t until you experiment with various upgrades and items that you’ll emerge victorious. I can appreciate this, but Odyssey doesn’t do much to ease you into the difficulty.

Beneath the surface (I’ll try and keep the ocean puns to a minimum) of the unique gameplay is a deep (I can’t stop the puns; help) upgrade system with various items and equipment. Because of the upgrades and purchasable items, you are encouraged to explore the levels to discover the currency, fittingly masked as pearls, to ensure success. Once again straying from the norm, Odyssey doesn’t have an XP system, but instead, makes you purchase upgrades. I’m a bit torn about this, because on one hand, it is nice to be rewarded for exploration, but on the other, thoroughly exploring does start to feel tedious after 90 levels. 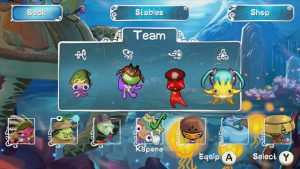 Regardless of the unique gameplay and charm, Squids Odyssey felt like a chore to play at times. For starters, navigating the menus feels clunky unless you’re using the touch screen. With this being from last generation, it seems like a huge missed opportunity to neglect making improvements. There were times when I was stuck on a section and dreaded going into the menus to level up because of how obtuse menu navigation feels.

Once the novelty of the gameplay wears off, playing Odyssey starts to feel repetitive and frustrating. One of the central mechanics is knocking enemies off the edge of the map for an insta-kill. You’ll want to do this because enemies are sponges to damage and it’s easier to just push them off the edge. The only problem is that since you have to sling-shot yourself into enemies, many of these instances will result in you flying off the edge, yourself, losing a precious squad member. 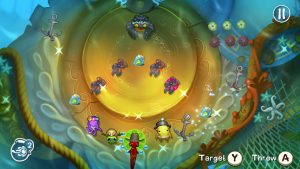 Too many times did I have to restart the whole level because of losing a squad member in an unfair way. That may not seem too bad, but the difficulty ramps up quickly and I often had to restart each level a few times. At 90 + levels with each one taking at least 10 minutes to complete due to restarts, that’s 15+ hours for a game that should only take around eight or so. Including cheap deaths to extend the longevity of the game feels like a sneaky way to control the perceived value.

Also, because the narrative is almost non-existent, I had trouble feeling motivated to keep playing, especially with the frustrating gameplay. Normally in a primarily systems-based RPG like this one, the gameplay is solid enough to hook me and not worry about characters’ motivations. Since Odyssey has neither a compelling story nor satisfying gameplay, it was hard to care about what happened next.

In spite of there being much complexity to the gameplay and mechanics, the audio design is a lot more relaxed. During the menus, you definitely feel like you’re immersed under the sea because of the chill sound effects and music. During the sometimes hectic levels, the music is catchy at times, but never stood out much.  It’s just fine and it serves its purpose.

Some of you may love the art and some will hate it. It looks like a lower budget version of Finding Nemo, which isn’t a knock against it. Super vibrant colors pop, with cute, charming animations. There is room for criticism here, though, because the art direction does resemble that of a mobile game. There isn’t anything inherently wrong with that, but there is a negative stigma with mobile games. I personally like the colors. As someone who dabbles in digital art, I can appreciate the line-work and goofy proportions; Not to mention the beautiful backgrounds.

There’s a particular section that takes place atop a giant, swimming tortoise (ala Finding Nemo.) Because the tortoise is swimming so quickly, the background pops and looks great against the ultra-vibrant character assets. Aside from just the tortoise stage, the backgrounds still impressed me. 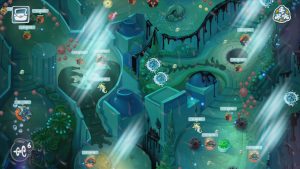 Squids Odyssey ran smoothly, for the most part. There were a couple of instances when I had to back out of the game completely, because of freezing. That feels like such an archaic issue that we should be past, but I am not a developer and have no clue what goes into QA for bugs like these. Nonetheless, the freezing was noticeable and took me out of the experience. Aside from that, I had no framerate dips or issues with textures. Odyssey isn’t a graphically intense game, so it makes sense that it runs smoothly.

The topic of covering value is a bit more complicated than it may seem, due to things I mentioned before. At face value, Odyssey looks great boasting its massive amount of levels for the price. At $14.99, it may seem like a steal for the amount of content. However, it seems like many of the levels are artificially lengthened with unfair deaths and poor design. So really, yes, you get a ton of levels, but your time spent with them may be frustrating. Is that value? You can be the judge of that.