I was excited to get my hands on Degrees of Separation as it has been written by Chris Avallone,  co creator of oblivion studios and lead writer from Fallout NV,  which in my opinion was blessed with some of the most creative and hilarious writing i have experienced in a game to this day. Fisto and Boone becoming just two of many characters in that game that have stayed with me long after i played. So when i heard he would be penning an indie title for moondrop studios my attention was definitely piqued and it would be something for me to definitely keep an eye on.

The adventure begins in  Degrees of Separation when our protagonists, Ember and Rime each wake from dreams that predict something terrible coming there way. Ember who lives inside a great oak tree in a smouldering forest, and Rime who is the last of a long line of royal defenders, from a once great ice kingdom both awaken to worlds strangely empty and decomposing and so venture forth out of there respective lands called by a mysterious force to find out just what exactly is going on.

Not long after they embark on there journey they discover the presence of one another  and discover that they are both bound by fate to help each other, although neither can see or hear the other. The tale of bonding through fire and ice to do so is narrated wonderfully by Kira Buckland who starred in Nier Automata and feels like a old tale from times long before retold generations later, the storybook art style and the fantasy setting complete with the usual dragons,  castles and forest areas making for a beautiful but nonetheless generic backdrop for our story.

At times the narration can become a bit disjointed nonetheless the voice work is excellent but it has to be as it is the only story you get here, no dialogue between characters or no story logs to further flesh out the experience some will like this style of story telling as it promotes imagination and wonder and some would want more, but for me it worked well and the story and world held a nice air of mystery up until the ending which i found satisfying and thought provoking. the story in degrees of separation always kept me wondering just what had happened in the world and at the end was worth the time invested 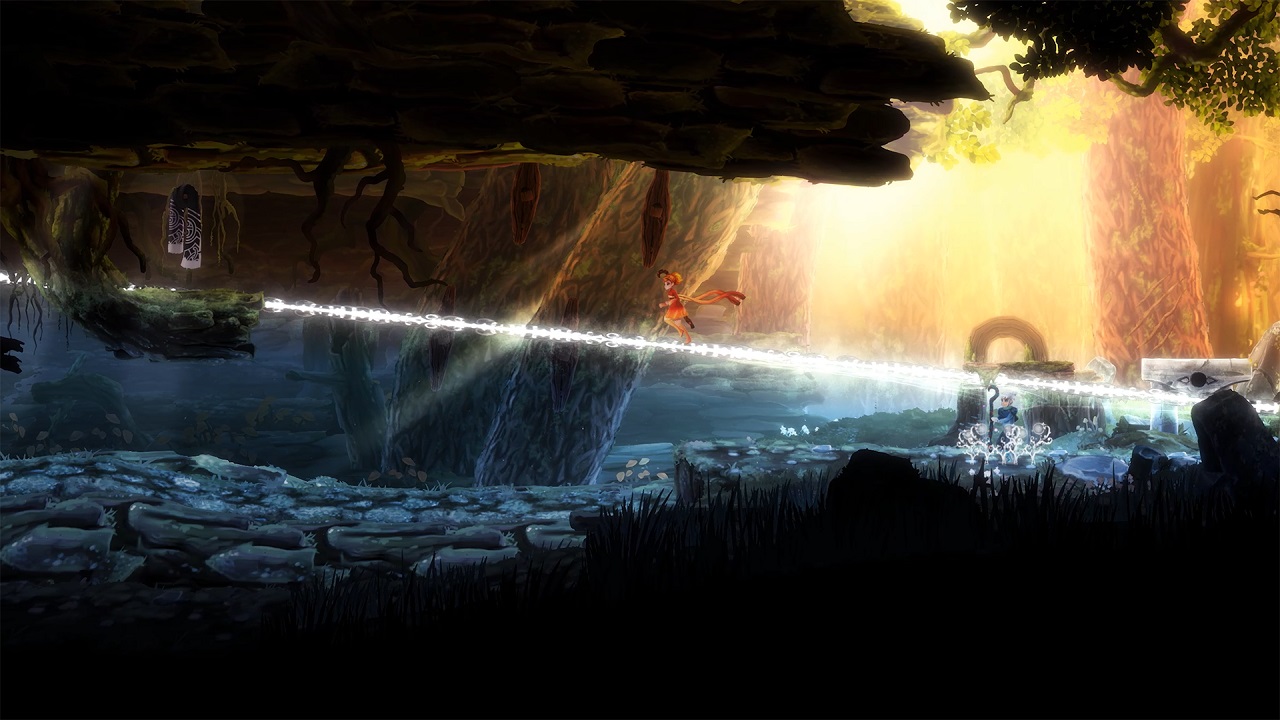 The game play in degrees of separation is basically co-op 2D physics puzzle platforming which feels nice to play the characters glide and float through the environment with a weighty but graceful manner which i found to be a joy to control, but the selling point of the game is in its elemental twist, which sees the player using the characters powers to manipulate the environment. Ember can fill lanterns with hot air for example, levitating platforms to reach areas that were previously out of reach, while Rime can turn water to ice and use his frosty aura to make snowballs solving various puzzles to reach shiny scarves which is the objective of the game and what you will be doing A LOT of

In theory this all sounds great but gets repetitive quickly with the same assets being used over and over for puzzles i was sick of the sight of pulleys ropes and said lanterns by the third world and although each world introduces a new mechanic they are world specific and i found them tedious especially the bomb one which would send the characters flying miles away from each other if they touched.forcing me to switch back and forth countless times constantly calling my companion back to me

CPU AI isn’t the best either which  can make for a few frustrating moments as i found a couple of times if one character would fall behind it was impossible to return them using the recall button prompting a restart. This was not a regular issue, frequent checkpoints presented this from becoming too much of a hassle and loading times were not too much trouble , maybe a reset button to return your characters together automatically would of worked a bit better?

Make no mistake this is a game best experienced and built for two, however even with two people the game play becomes a bit repetitive  i would say my least favourite part of the experience as a whole was the game play it isn’t awful by a long shot and it is tight mechanically but lack of variety in puzzles and things to do took away some fun out of exploring the world. 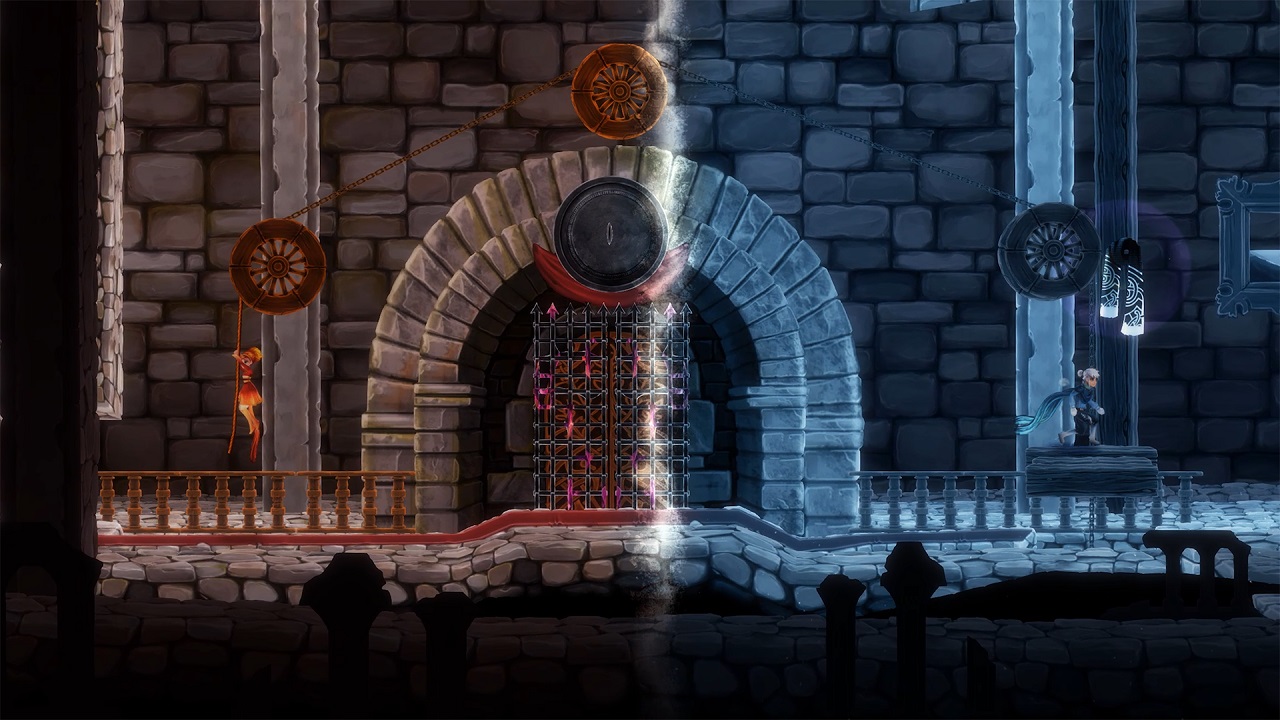 Creaks and groans add a sense of loneliness while you explore the castle.

I am a big fan of the audio in degrees of separation. it complements the art style perfectly, with sweeping melodies that blend with the medieval Norse and Celtic themed locales you find yourself traversing around in.  it helps bring the storybook tapestry you weave with Ember and Rime to life, the sounds of glistening stardust, haunting vocals and the previously mentioned great voice acting working in tandem to create the beautiful bgm with pipes and thumping drums rising occasionally delivering a sense of grand urgency.

At times just hearing nothing but the wisps of wind and the soothing sounds of the environment as you go about your scarve collecting brought me a sense of peace i enjoy about these type of games. The mechanical creaks and moans of the numerous pulleys and levers grinding and creaking together adding to the sense of loneliness of two individuals on the same journey joined only by the sense of another, and oh man that ending music it was awesome and rousing capturing the emotion at the games end perfectly. I think when you search for a games OST after playing it you know its good and this for me was no exception 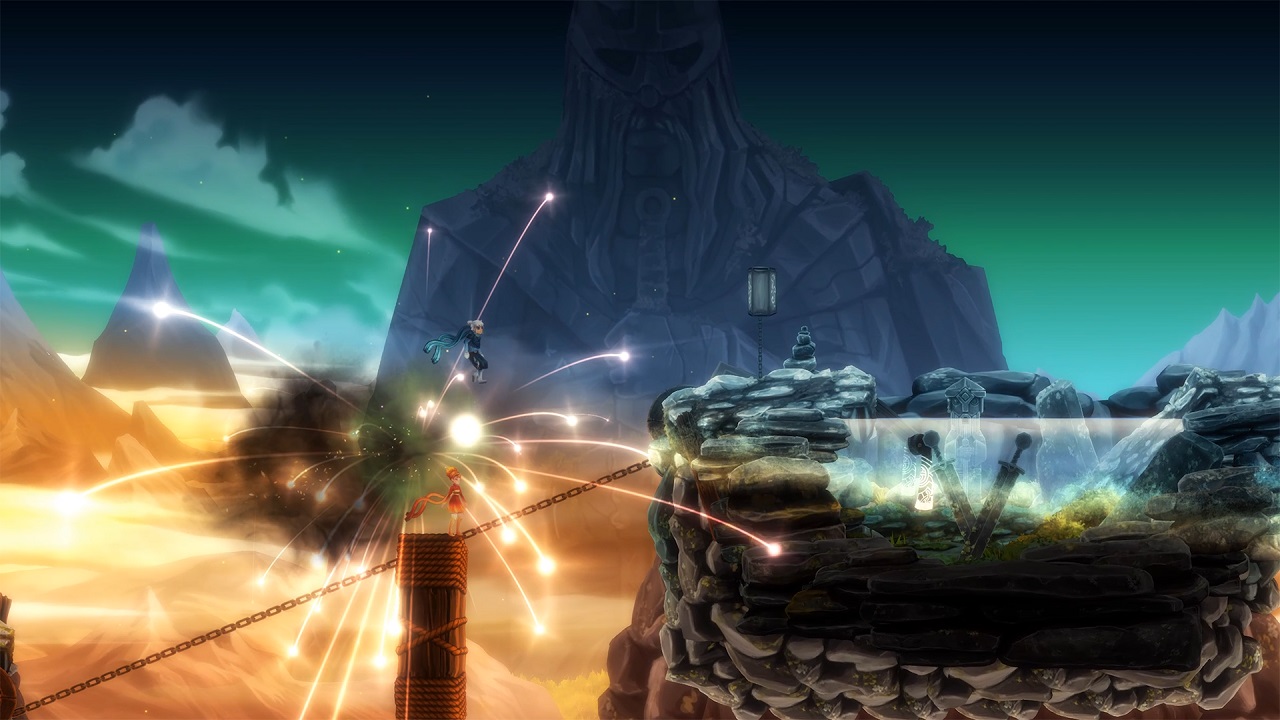 Degrees of Separations 2D visuals are lovely to look at, the contrasting hues from both ice and fire elements further expanding on the fairy tale art style delivered by moondrop studios games being pleasing on the eyes. the characters are animated beautifully with movements flowing gracefully which makes simple stuff like moving seem far better than it should.  The backdrops while beautifully drawn are not the most original with the mountains castles and forests being seen countless times  they still hold their own identity, i particularly like the way the visuals transition when Ember and Rime run past, with forests sprouting leaves and losing them quickly and caves glow with warmth then suddenly going cold and damp the visuals really bring into fruition the vision the developers had in mind making this game. i think this one of the prettiest indies i have  played in a long time and the art style will leave a impression on me for a while definitely.

Performance wise the game holds up well with a couple of minor sound glitches and a frame rate drop here and there the only thing that majorly detracted from my experience that being mainly because the music is so good i took extra notice when it happened.

I think visuals like this are worth the price of admission alone.

In terms of length, Degrees of Separation is average for a indie of its type clocking in at around six hours for a first play through which for the asking price is not bad. However once you have collected all the scarves which IMO is too a repetitive task as i got bored just collecting the ones needed to unlock the next level, there is no real reason to replay the game bar a alternate ending.  The package of the experience as a whole however is worth it as its a wonderful experience that has had a lot of love and effort poured into and if you enjoy games for visuals and sound design then for the price of a pizza (and ice cream) this is well well worth it in my opinion as you and a friend (or lover)  can have a good night in front of the fire eating ice cream reenacting the adventures of Rime and Ember together.

Overusing of same assets for puzzles really does a disservice to the rest of the package,