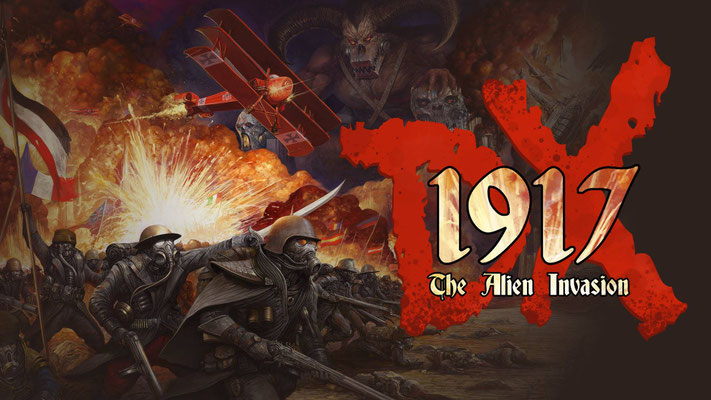 Let me start off by saying I love Shmups (Shoot ’em Ups). Something about dodging a million bullets and being set back to the beginning of the stage after getting hit only once just puts me in such a relaxed mood….. but in all seriousness, I was excited about 1917-The Alien Invasion DX, especially with it being on the Nintendo Switch. The idea of a mashup between aliens and WW1 is an interesting premise which brings to mind Aces of the Luftwaffe. Coined as a “Bullet Hell Memorization Shooter”, The Alien Invasion is a vertical shooter that has you piloting a WW1 plane to defeat alien spaceships and take down bosses. This is a bite-sized experience that unfortunately, falls short for me.

As an arcade shooter, there isn’t much narrative. Yes, there is some dialogue here and there, but if you’re in this for the story, you’ve come to the wrong game. “Dr. Brunhild Stahlmuller, upgrades a WW1 Triplane with superior alien technology to attack the invaders”, according to the eShop write-up. That’s the gist of the story, which is utter nonsense. There are times when Dr. Stahlmuller communicates with you in-game, but it’s mostly just yelling about the enemies on-screen instead of anything narrative driven. As someone who doesn’t usually get too engrossed in a game’s story (blasphemous, I know), it didn’t bother me that Alien Invasion was more focused on gameplay; Which, is fine because this game does feel satisfying to play.

It’s so important for shooters like these to feel right with tight, responsive controls. Since it’s so mechanically driven, there’s no room for anything but great gameplay. On that front, Alien Invasion delivers. Moving the planes feels great and after a while, put me in an almost zen-like state of concentration. It’s quite punishing, because of how accurate you have to be, but it’s rewarding when you finally land the final blow on a pesky boss. Seeing as how it’s called a “Memorization Shooter”, there were times when I could get through an entire level perfectly, because I had memorized the enemy spawns or patterns. Doing that was so rewarding, it made me feel like I was actually good at something that looks so difficult. 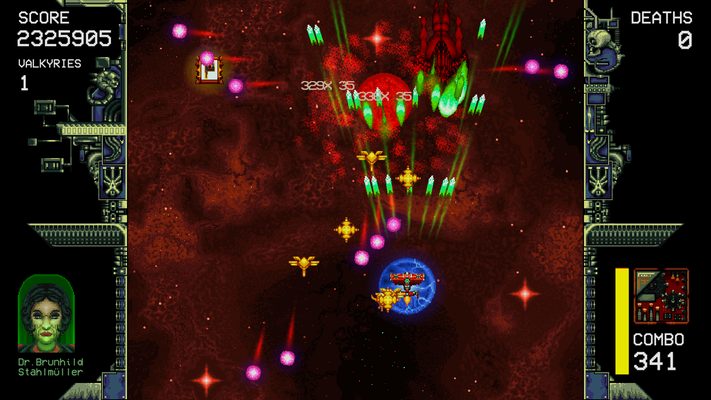 Even though the movement and shooting feels satisfying, the gameplay itself is simple and somewhat shallow. There are a few different pickups, like a shield or weapon upgrades, but other than that, there isn’t much depth in terms of gameplay variety. It would have been nice to see a system in place that allowed for ship upgrades, or even a currency system for different weapons to purchase. All we get with Alien Invasion is just a basic, vanilla shooter with nothing beneath the surface. If you play this for even five minutes, you can get the idea of the whole game and that’s where most of my issues lie.

That being said, one of my favorite parts of Alien Invasion was battling the bosses at the end of each stage. The smaller enemies are pretty forgettable, but the bosses are not only memorable, but I could definitely see them giving people nightmares. Some of them resemble demons from DOOM, with a mix of weird satanic imagery. The battles themselves are difficult and revolve around intense focus and pattern recognition. I had a ton of moments that consisted of me defeating a boss whilst on the brink of death, which was exhilarating and exciting.

I do recommend playing this with a buddy in local couch co-op. The entire game can be played this way, which is probably the ideal way to experience Alien Invasion. It’s tough as nails, so having a friend to assist in the alien slaughter can be helpful.

One of my biggest complaints is that Alien Invasion is absurdly difficult. It’s as if this game is only for hardcore Shmup fans, which will be a turnoff to most. It pushes players away and that’s a shame because this game does have its merits. The third level literally took me 94 tries to finish; I know because there’s a death counter in the top right corner that taunts you and adds salt to your wounds. Fortunately, the levels restart quickly, so there is no waiting around during loading screens. Shmups are notoriously difficult, but when it comes to accessibility, Alien Invasion isn’t for most people, sadly.

The soundtrack of a game can really set the tone, and I’m happy to report that the music in Alien Invasion is one of the best parts of this arcade shooter. Mowing down alien ships while piloting WW1 planes set to thumping, upbeat electronic music is an interesting combination. The tracks remind me of songs from Hotline Miami, which has one of the best soundtracks in video game history. That’s a huge compliment for Alien Invasion and I urge you to play it with the volume turned all the way up if you can. It’s aggressive and puts me in the mood to save the planet from alien scum.

Aside from the music, the rest of the sound effects are what you’d expect: retro gunfire and an all-too-cringy announcer that let’s you know when you’ve hit a combo. The sound of “COMBO UNLEASHED”, tends to get old after a while.

The art direction is probably one of the most unique things about Alien Invasion. Mixing retro-style graphics with the theme of aliens and WW1 are just not something you see too often. The colors are vibrant and the levels are memorable and diverse. It’s impressive how developer, Andrade Games created such contrast in the color palette and managed to keep each level fresh.

Some of the visuals are over the top, like a group of cultists worshiping one of the alien bosses. It’s kind of creepy but I love the game for it. Upon defeating a boss, the screen is sprayed with blood, which made me smile way more than it should have. I give huge props to the artists of this game. 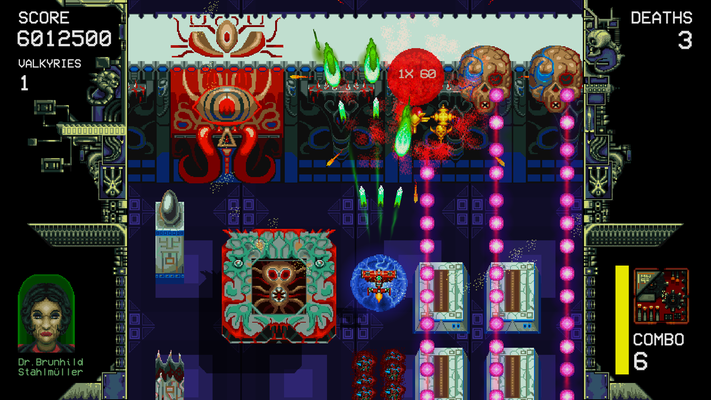 Unfortunately, a huge issue comes with the performance. Towards the end of the game, a ton of enemies appear on-screen and the frame-rate takes a huge dip, making it difficult to even play at times. It didn’t happen too often, but the slowed frame-rate was noticeable and actually rendered the game unplayable a few times. I know games are hard to make, but low frame-rate in a fast-paced shooter is hard to ignore. This is probably something that will be fixed, but as it stands, be prepared for a rough time with the latter half of Alien Invasion. You will be frustrated, not only with the slowdown, but the difficulty, in general.

There are only a handful of levels in 1917-The Alien Invasion DX. Picking this up might leave you disappointed with its lack of longevity and despite it only being $8, I have a hard time justifying paying for a game that doesn’t have much content. There are less expensive games with dozens more hours of content, especially considering that free-to-play games are so popular these days. It’s to the point that even if this game were free, I’d STILL have a hard time justifying the value, simply because Alien Invasion is the epitome of “okay”.